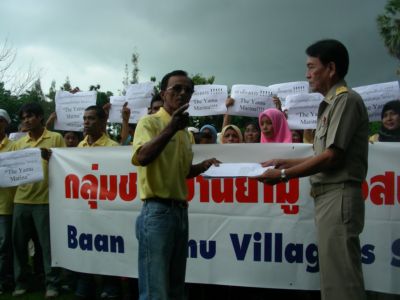 PHUKET CITY: In the latest in a back-and-forth dispute between opposing village groups, developers and the governmen, about 200 villagers from Baan Yamu in Pa Khlok staged a peaceful demonstration outside the Phuket Provincial Hall on May 29 to show their support for a controversial marina project at Cape Yamu.

The planned 60-million-baht project, to be constructed by The Yamu Company, would also include a 39-berth marina, a hotel covering 100-rai hotel, and other facilities.

The group had a letter addressed to Phuket Governor Niran Kalayanamit showing their support for the project.

The marina would end the villagers reliance on subsistence fishing, move them into more modern vocations and provide better prospects for their children’s futures, the letter said.

The group arrived in two buses, which arrived at around 10 am.

By 10:15 am, Phuket Province Chief Administrative Officer (Palad) Piya Bharatasilpin came down to accept the letter on behalf of Gov Niran.

“We came here to show our support for the Yamu marina project. Nobody put us up to this. We came by ourselves because we want Yamu to enjoy the benefits of development, just as parts of the island have,” he said.

“Phuket is a tourist destination…but the development is happening very slowly at Baan Yamu. We want the project to give villagers more jobs, more money and a better life,” he said.

When asked if her presence was sheer coincidence, she said: “We are here only to observe. We want to be fair to both sides. It’s up to the villagers to decide.”

“Our project currently employs more than 40 workers from the local villages to work as gardeners. We will also be considering Yamu villagers first to hold other positions at the marina. We want them to get jobs with us.”

Responding to the concerns raised by local groups that the development would harm the environment, K. Bangsod said, “The sea grass and dugong are nearly all gone. The actual situation is different from the way environmental groups portray it in the media. Those people aren’t local villagers, so they don’t see what it is really like here.

“The villagers here know very well that the seagrass and dugong have almost disappeared. They may be gone entirely.”

Phuket’s highly-endangered dugong population depend on seagrass as its sole source of food.

These assertions have been supported by research conducted by marine experts at the Phuket Coastal Fisheries Research and Development Center at Cape Panwa,

The May 29 demonstration follows on the heels of an anti-marina protest May 17, when 10 village representatives presented a letter to Gov Niran and the Phuket Provincial Marina Transportation Office protesting a new road proposed in Baan Yamu. If the development plan goes ahead, the current road would be closed and diverted around the hotel developments, a detour some villagers oppose.

There were also a series of meetings between government officials, representatives of the marina, and villagers held on May 3, April 22 and April 20.

These meetings produced mixed results. Villagers opposed handed in letters of protest, while The Yamu Company pointed to a survey it conducted of 200 villagers showing that 75% of the local population support the marina project.

After receiving the protest from the group on May 29, K. Piya took the document and left by car. Gov Niran previously said that Vice-Governor Worapoj Ratthasima will organize a meeting to discuss the issue soon, but no date has yet been announced.