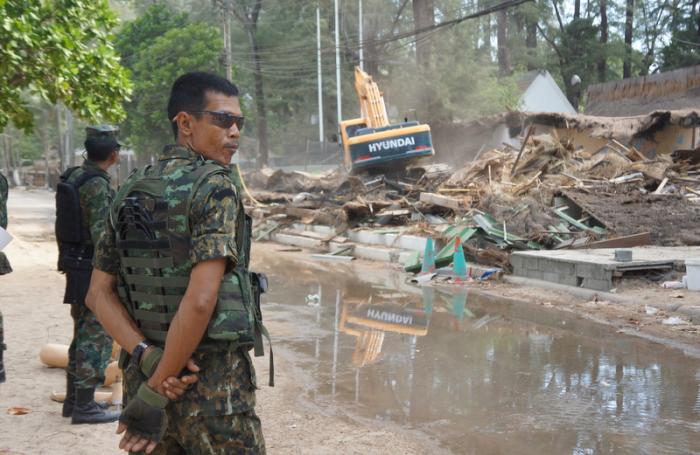 PHUKET: A number of iconic beach clubs on Phuket were crushed during the demolition of the shop houses along the Surin Beach boardwalk yesterday (story here).

“We are not ruining Surin Beach; we are returning it back to the unobstructed, beautiful beach it once was,” Phuket Vice Governor Chokdee Amornwat insisted, attempting to explain to a group of stunned tourists who claimed that the government officers were destroying the beach. “It has been a very long process to clear these buildings from the public land. We have been very careful, taking it step-by-step.”

Ahead of the demolition of the beach clubs, the Twinpalms Group held a ‘One Last Time’ beach party on April 16, just days before staff would be scampering out of the facility before it was torn down by a pair of powerful backhoes.

“It was our last chance to say ‘thank you’ to those who have enjoyed, over the years, the utopia that rose along the Surin Beach shore, as well as the incredible dedication from all our employees who made it possible,” Twinpalms Group General Manager Olivier Gibaud said.

With the opening of Catch Beach Club by Twinpalms more than a decade ago, Surin Beach became well-known as Phuket’s most exciting and fashionable beach, with Catch leading the way in bringing fabulous dining and seaside experiences to beach lovers from around the world, Twinpalms said in a statement to the press.

The closure of Catch and Bimi comes as part of a government drive to honor and celebrate the Royal Family. Surin Beach was dubbed a ‘Beach of Honor’ by Vice Governor Chokdee at the end of last year, making it the third category of beach in the island’s ever-changing new management system.

Though the beach is unique for being the only one in this category, it is managed in the exact same way as those in the ‘virgin beach’ category, with no umbrellas, beach chairs or vendors offering any services or goods.

“This third category is set aside only for Surin, as HM King Bhumibol Adulyadej and HM Queen Sirikit visited its sands in 1959,” explained V/Gov Chokdee.

The beach clubs were among a number of businesses swept up in the National Council for Peace and Order’s (NCPO’s) campaign to ‘clean up’ Phuket beaches, demanding that local officials remove any and all illegal establishments on them. The campaign saw dozens of businesses receive eviction notices with a deadline date of June 2014.

Originally, only the parts of the clubs and businesses that extended to the beach side of the boardwalk on Surin Beach were demolished, with government assurance that the remaining structures would ‘most likely’ go untouched.

“The buildings were illegally modified, turning the entire area into a mess. It got to the point that it was impossible to even see the original structures,” V/Gov Chokdee said. “They started out as small businesses, but then it got completely out of control.”

The beach clubs, as well as the restaurants and other businesses on the east side of the Surin beachfront path, were occupying units originally built by the government.

The buildings were leased out to locals, who then allowed private businesses to operate at the facilities.

“The local government built the small stalls so that villagers could earn some money after the tsunami, back when Surin Beach was just a small, local beach,” said V/Gov Chokdee. “As time passed, more and more tourists came and the locals broke their contracts by leasing the shops to third parties. Suddenly, most of the buildings housed businesses backed by foreigners. It totally contradicted the intentions of the original agreement.”

Officers have not provided the Phuket Gazette with the original agreements, which allegedly state that locals were not to sub-lease the buildings.

“There were even venues selling alcohol, which is completely illegal, as the buildings are in a public park,” V/Gov Chokdee said.

“We admit that it comes down to a lack of law enforcement. However, we are working very hard on managing Phuket’s beaches,” he said, despite having already made it clear that the structures were not on the beach, but in the public park adjacent to Surin’s sands.

OrBorTor President Ma-ann Samran confessed to the Gazette last year that lease contracts to the locals had ended years ago. He pointed out that the government had not collected rent for years.

Twinpalms Group, which operates Twinpalms Phuket adjacent to Surin Beach, has continued to comply with government requests since the beginning of the saga in 2014, explained Mr Gibaud.

“Everything in life comes, lives and goes; we are very thankful to have had the opportunity to delight and be in the memory of many Catch and Bimi Beach Club guests over the years. This chapter of Catch Beach Club has drawn to a close, and everyone should be excited and look forward to the next,” he said.

The group has already gained some traction with the Palm Seafood Restaurant, Lounge and Bar on Bang Tao Beach and will be opening HQ Beach Lounge on Kamala Beach soon.

“I am extremely sad. I’ve come [here] on holiday 16 times in four years. I love Thailand. I love the people. I just think that it’s so sad that these people will have no work anymore. I feel very emotional about the people who are working at Twin Palms [Catch and Bimi] as well as the small shop owners. Where will they go?” asked Karin Mackiy, a 60-year-old Australian who witnessed the demolition.

V/Gov Chokdee assured those on Surin Beach yesterday morning that the government wasn’t going to abandon the locals.

“Impacted locals have been informed that they can register with the provincial government. We will find a place for them to earn a living,” he said. “Please be aware that the sacrifices we are making now are for the betterment of Phuket’s future and the happiness of the public.”

Video Report: Portraits of Princess on show in Phuket Town