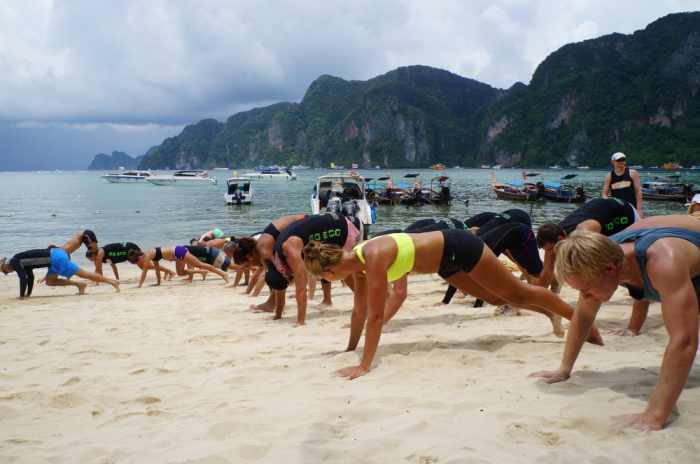 PHUKET: After their one-year anniversary celebration to Phi Phi, Krix Luther and the Clean The Beach Boot Camp gang will be back on their home turf at Nai Harn Beach in southern Phuket tomorrow.

Last month, over 50 eager boot camp participants, veterans and first-timers, piled onto Blue World Safaris’ speedy catamaran for the anniversary event, banking on a day of dolphin watching, cliff jumping and snorkeling… and let us not forget a solid workout and a beach cleanup.

The anniversary participants scoured the workout area on Phi Phi Don for shards of glass before the warm up.

The warmup tapped into the inner beast of many participants as they scampered across the sands using quadrupedal movements that mimicked animal motor patterns, explained Krix. 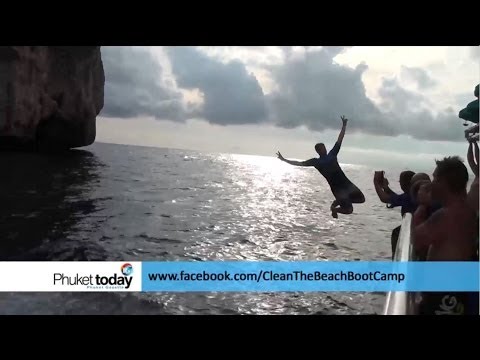 The real workout, however, was intense body-weight training, with each participant fighting their own battle to finish as many reps as possible in 10 minutes.

Panting and gasping, participants cooled down with a short yoga session, then got physical with a match of tug-of-war.

With the fun and games having come to an end, it was time for the environmental enthusiasts to give back. Tourists stopped and stared as the sweaty mass of people spread out across the beach and began the cleanup. Several Chinese tourists stopped, and momentarily joined in.

On the boardwalk another group of five or six tourists stood and watched.

“One, two, three,” one of them counted… there was a roar of applause, well, at least there was applause. Several others asked bootcampers to pose, rubbish in hand, for the ideal Phi Phi photo-op.

The Clean The Beach Boot Camp team set a new record for the number of bags of rubbish collected, which were quickly swept away by Tero Kenmas, manager of The Adventure Club. Tero promised to have it all properly disposed of.

“It went perfectly,” Krix told the Phuket Gazette. “So many worries of things not happening, like the dolphins not turning up, or there not being any rubbish to clean up or not being able to dispose of the rubbish properly.”

Though the beach was by no means miraculously transformed by the end of the day, it was better.

But perhaps more importantly, the boot camp had brought together a group of strangers, many of them Phuket expats who had never met, despite being nearly neighbors. These strangers had become part of the community Krix and the other loyal Clean The Beach Boot-campers are creating. A community that is helping to tackle the environmental issues that face Phuket with clear eyes, clean minds and strong bodies.

“Tomorrow is going to be good. The weather will be perfect and it gives other people who were put off by the whole ‘boot camp’ to give it a try. It will just be one hour of yoga – nice, easy and very relaxing – then we clean as normal,” Krix said today.

The Clean the Beach Boot Camp, the event and community, is open to everyone: locals, tourists and expats. If you aren’t feeling like working out, you can still visit or live in Phuket with a clean conscience by joining the team on Nai Harn Beach at 10am tomorrow.