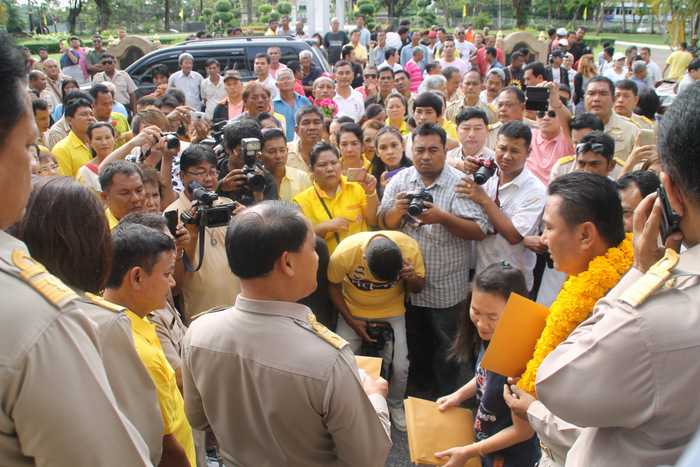 PHUKET: Hundreds of people turned out at Phuket Provincial Hall today to support a complaint against Cherng Talay Police allegedly abusing their position of power under martial law in a raid on a family home last week.

The complaint states that a total of 17 officers – mostly from the Cherng Talay Police Station and many of whom were out of uniform – arrived at Ms Hathairat’s home at about 7:30pm on December 3.

Hathairat Songyot believes police abused their powers by searching her home without a warrant. Video: PGTV

“They were accompanied by several military personnel in uniform. They raided my house, searching for my brother, Padungsuk,” she said.

“They said that they had an arrest warrant for him, and that he was wanted on criminal charges under the Offence Arising from the Use of Cheque Act BE 2534.”

Attempts to stop the officers from entering the home were brushed aside, though Mr Padungsak was nowhere to be found.

“The officers accused me and my relatives, including Mayor Worrawut, of obstructing them in performing their duty,” Ms Hathairat told the Phuket Gazette.

“They said that they have the authority under martial law to enter and search any house to apprehend a suspect. However, they did not even show us the warrant, and they refused to show their police ID cards.”

Governor Nisit was asked to have the officers who took part in the raid transferred in order to ensure there would be no repercussions for filing the complaint.

Though he did not immediately agree to transfer the officers, Gov Nisit vowed to have the incident thoroughly investigated.

“We will form a task force to establish what really happened,” Gov Nisit said.

“We will ask the commanding officer who ordered the raid to explain what happened. We will be fair to both sides.”

Meanwhile, the search for Mr Padungsak continues, a police officer who asked not to be named confirmed to the Gazette.

Girl remains in Phuket hospital after ‘hail’ of paint cans