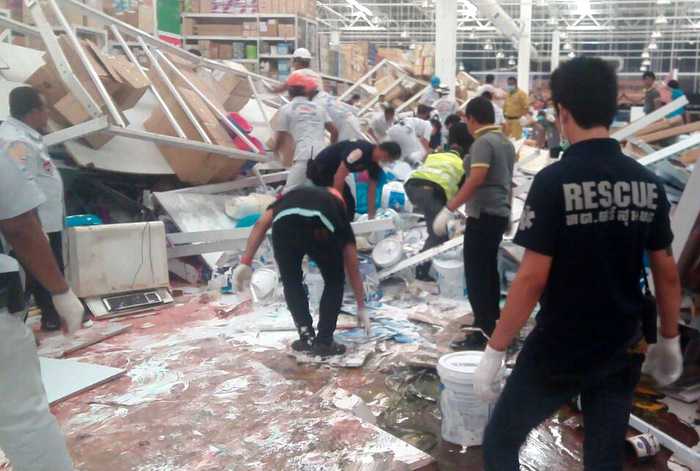 PHUKET: An 11-year-old girl trapped under a rack of shelves at the HomeWorks home-improvement store yesterday afternoon will remain in hospital tonight under observation as a precaution only, the Phuket Gazette was told this afternoon.

Eight racks of shelves reaching up to about three-meters tall collapsed at the store, inside Central Festival Phuket East, bringing down a hail of full paint buckets on a family of three.

Pitchaya Saekim, 11, was taken to Bangkok Hospital Phuket with injuries to her face and her right shoulder. Her 35-year-old mother, Phatcharee Boontaley, and 42-year-old father, Mr Paiboon, both suffered bruising from the accident and were also taken to the hospital.

“Our heartfelt sympathies go to the family,” said a statement issued this afternoon by the management of the HomeWorks outlet.

“Doctors have confirmed that all three are now safe. The mother and father have been discharged from hospital care, but Pitchaya will stay under observation overnight as a precaution.

The store’s management team will thoroughly investigate the incident, the statement added.

“We are hurrying to find out why the shelves fell over. We will announce what caused [the racks of shelves to fall over] as soon as we can,” it read.

Meanwhile, the affected sections of the store remained closed during the investigation.

One HomeWorks employee who spoke to the Gazette on condition of anonymity said that he heard a noise in the electrical fan section, then ran to see the rack of shelves with electrical fans topple over.

“It fell onto the rack of shelves with paint cans, causing them to fall onto the family,” he said.

“We all rushed to get the girl and her parents out as quickly as possible. Thankfully, no one else was caught under the racks.”