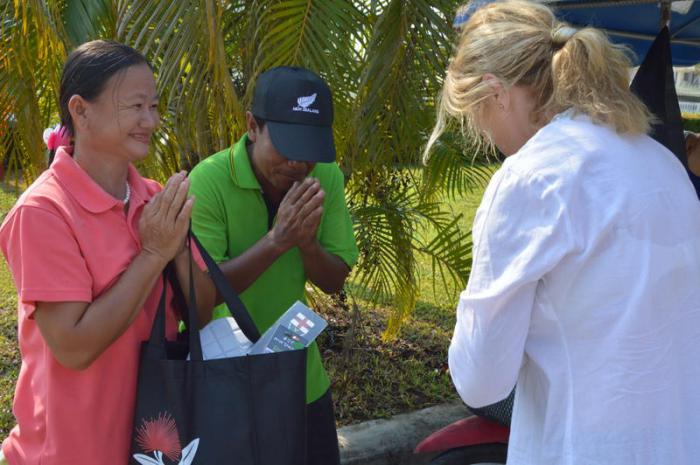 PHUKET: It was an emotional meeting last week between the man who lost his only source of livelihood – a sidecar outfitted to make crepes – and the New Zealand woman who gave him the money he needed to avoid borrowing cash from loan sharks to buy a new one.

Crepe vendor Prayoon Impuang, whose sidecar was consumed by flames on February 12 (story here), drove his new sidecar to the Gazette office in Koh Kaew on March 27 and cooked kanum Tokyo for his donor, Delyse Gibson.

“My heart is full,” Mr Prayoon said through an interpreter, pausing from time to time to maintain his composure. “If I hadn’t gotten help from you, I’d have gone to a loan shark for sure. However, now my life is back to normal and I can support my family again as before. Thank you so much.”

Ms Gibson had originally planned to visit Phuket in April, but changed her plans when she heard Mr Prayoon would be going back to his home province for the month.

“I wanted to make a connection with Mr Prayoon, and to meet his family,” Ms Gibson said.

“I’ve had difficult times in my life, but there was always someone who helped me. I felt fortunate to be in a position to give to someone else, and I hope to keep in touch with Mr Prayoon,” she said in a voice that quavered from time to time.

Ms Gibson presented Mr Prayoon and his wife, Dah, with souvenirs from New Zealand, including a flag and a baseball cap bearing her country’s national emblem, the Silver Fern.

Mr Prayoon mounted the flag on his sidecar and blessed Ms Gibson.

“May you have a healthy and long life. If I’m ever in a position to give you something in return, I’ll surely do it,” he said.

Phuket crepe maker meets the stranger who saved him from sharks. Video: PGTV