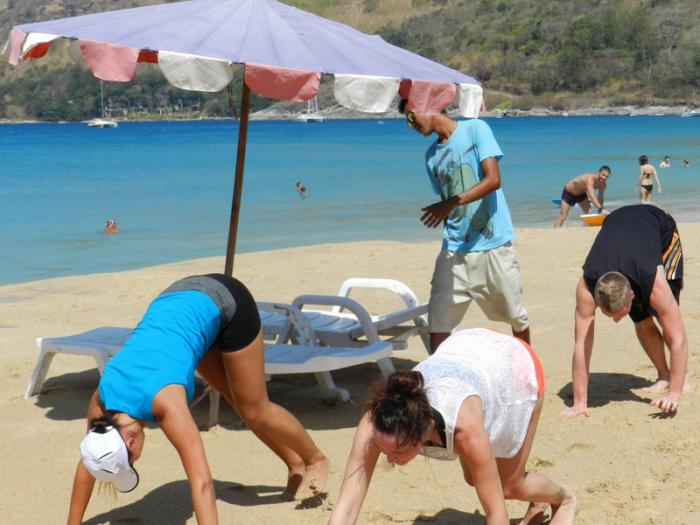 PHUKET: The Nai Harn Beach Chair Club president took to the sand on Saturday in an attempt to dissolve lingering tension between lounge chair operators and a group of expats after a conflict erupted on March 15 over shared beach space.

Two weeks ago, during the “Clean the Beach Boot Camp” at Nai Harn Beach, a battle over space flared up between the group and a few lounge chair operators (story here).

“I understand where each party is coming from. I support what the beach-cleanup group does – it creates a community and keeps the beach clean,” Club President Joung Solos told the Gazette.

Mr Joung mentioned that while observing the group’s activities on Saturday, he noticed that it had an adverse effect on one chair operator’s business.

“The group was exercising very close to the last line of chairs. There was little space between them and the chairs and it became quite noisy during the activities,” he explained.

“I could see that it made some tourists in the vicinity uncomfortable. The operator ultimately lost business during the boot camp, as some customers did not want to sit in the area.”

Mr Joung noted that this was probably why the operators had asked the group to move away from their chairs on March 15.

“It is a public beach, therefore everyone has the right to be there and to use it,” he said. “The operators have a right to their space on the beach as much as the group does.”

One of the lounge chair organizers spoke up about the effects the boot camp has on his business.

“We have no customers because of this group. Tourists complain about the noise and have no space to relax,” explained the man, who asked to be named only as Mr Tuey.

“They drop their things next to our chairs and some of them sit down without paying.

“I have explained myself to them many times, but they haven’t listened. I don’t want to be violent, I just want them to respect our space. It would be better if they moved their activities elsewhere or even put more space between themselves and the chairs.”

Mr Joung recognized his responsibility over the beach chair club members and offered both short-term and long-term suggestions to settle the conflict between the two parties.

“The boot camp could rent a set of chairs while they are exercising. That way, they can have a place for their things and, if needed, a place to rest. This will also help to make the beach chair operators feel more comfortable,” he said.

During the meeting, local Phuket businesses, as well as the Phuket Gazette‘s Phuket Today show, stepped up to sponsor the boot camp by volunteering to rent a set of chairs every two weeks when the event is held.

“For the long term, the group should explain their activities to Rawai Municipality. I believe that officials will support the group’s objective because it is a positive activity that benefits the public,” Mr Joung said.

In the meantime, the club president promised to speak with all Nai Harn chair operators and explain to them the boot camp’s objectives himself.

“Some chair operators may misunderstand what is happening when the boot camp comes to the beach. Nonetheless, they should not try to cast out anyone who wishes to spend time at the beach, because it is a public area,” Mr Joung

“We should keep lines of communication open and continue to discuss the situation, so that every party is happy.”

Krix Luther, leader of the “Clean the Beach Boot Camp”, supported the ideas put forth by Mr Joung.

“This is a good, initial solution to the conflict. I agree with his advice,” Mr Luther said.

“I will talk to my boot campers and we will try to be more aware of the affect we have on others at the beach.”

“We will continue to do what we do, as it is good for the environment. And I hope to gain support from Rawai Municipality in the future.”

Phuket motorcyclist struck and killed picking up his bike after spill