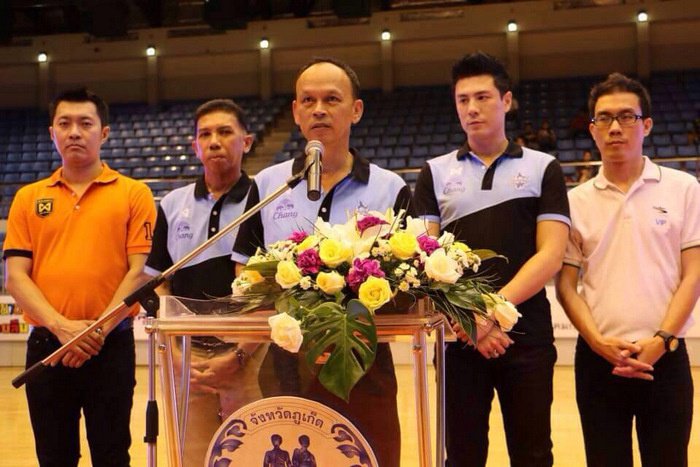 PHUKET: The island’s sole team in the national Futsal League, Phuket United FC, unveiled their squad for 2015 Futsal League lineup, which gets underway on Saturday.

Vice Governor Somkiet was guest of honor at the ceremony, held at the Saphan Hin gymnasium, and was joined by Wirat Pathi, director of the Sports Authority of Thailand Phuket office and Phuket United FC chairman Supachok Laongpet.

“We held this ceremony to strengthen the team, present them to the public and to encourage futsal players in Phuket province,” said Mr Supachok.

“Even though we are a new team, we are ready for the up coming match, which will be played here at the Saphan Hin gymnasium.”

Phuket United joined the Regional Futsal tour in 2011 and won the championship, making it possible for them to join the 6th Thailand Futsal League in 2012-13.

“Phuket United is a strong team. We have much support from our fans in both the government and private sectors,” Mr Supachok said.

“We are ready for the upcoming 2015 year. I hope that futsal will bring much fame to Phuket.”

Phuket United will take on Surat Thani at the air-conditioned, 4,000-seat gymnasium in their opening match for the season on Saturday.