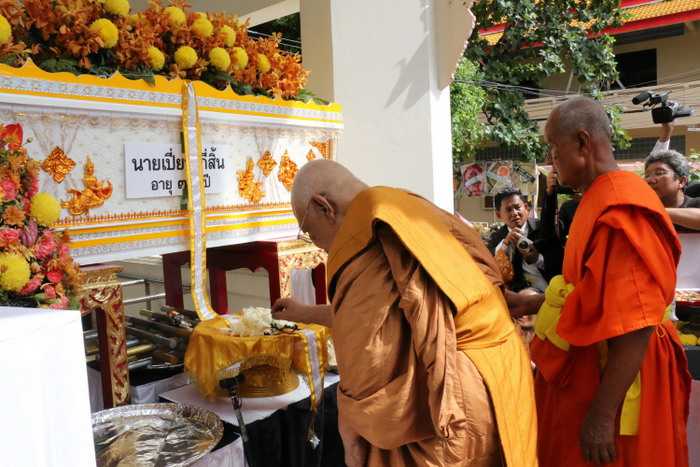 Mr Pian died from a heart-valve disease in his home at the Rock Garden housing estate on October 7 at the age of 70.

A fai prachataan provided by the Royal Household Bureau was used to ignite the cremation pyre in recognition of Mr Pian’s special contribution to society (story here).

During the nine days leading up to the cremation, hundreds of people gathered at the Keesin family home in Patong (story here).

Mr Pian was born on February 12, 1944, and fathered five children with his wife, Srikham Keesin.

Two of his sons, Preechavude “Prab” and Pattawee, are still facing mafia charges for their alleged role in the island’s taxi cartel.

Before his political career, Mr Pian served in the Royal Thai Army from 1965 to 1967 as part of his compulsory military service. He then volunteered to serve in the Army during the Vietnam War from 1967 to 1969. He was stationed at the Khao Chon Kai Army base in Kanchanaburi province. 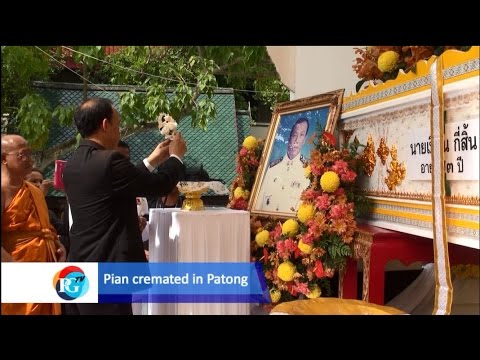 Hundreds turned up to pay respect to Pian Keesin, who died at the age of 70. Video: PGTV

The kingpin’s political career started on February 12, 1974 when he ousted Fad Krailerd for the position of Phu Yai Baan (village head) of Village 3, in what has since become Phuket’s leading resort town. He maintained the position until 1993 when he became the kamnan for the Patong sub-district, replacing Wichan Sawatdirak.

Mr Pian’s next move was an enormous leap for Patong, as he was elected the town’s first mayor in 1995. He then served five terms – totalling nearly two decades.

On March 7 of this year, Mr Pian was suspended from office by the Administrative Court Region 8 due to allegations of vote fraud.

He received a yellow card for the infractions, allowing him to run again in order to maintain his old roost. However, his political career ended when he lost the race to Phuket Democrat Chalermluck Kebsup in April (story here).

Shortly thereafter, Mr Pian was forced to surrender to police as he faced a slew of mafia charges. Nonetheless, hundreds of those who supported him greeted him at the Phuket City Police station with flowers and cheerful messages (story here).

Mr Pian and his two sons were to face charges of extortion and other criminal activities carried out by a criminal association on October 8 – one day after Mr Pian died.

Mr Prab and Mr Pattawee were given a grace period of one week to mourn their father’s death before facing the charges.