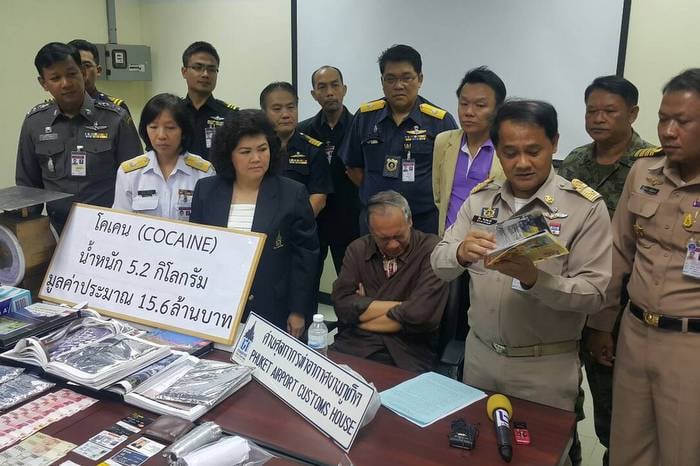 PHUKET: An Indonesian man was arrested at Phuket International Airport yesterday in possession of 5.2 kilograms of cocaine, which he was transporting from Columbia to Khao Lak.

Jemani Ikhsan, 63, had departed Bogota, Columbia, on April 18 and connected in Panama City, Panama; Sao Paulo, Brazil; Qatar; and Singapore before landing in Phuket at about 7:20pm yesterday.

The cocaine, valued at about 15.6 million baht, was contained in plastic bags that were wrapped in foil and hidden inside books with the centers hollowed out.

“Mr Ikhsan was transporting the drugs from Colombia to Khao Lak, in Phang Nga,” Montira Cherdchoo, director of Phuket Customs, told the Phuket Gazette at a press conference this morning.

“Customs officers noticed that the books inside his bag looked strange when they were going through the x-ray scanner, so they took them out to inspect them and found the drugs stashed inside.”

“It is very important that Phuket customs officers carry out their duties with the utmost care. Please continue to keep a close eye out for any drugs coming through the airport,” he said.

Mr Ikhsan was charged with possession of a Category 1 drug with intent to sell, and smuggling illegal drugs into Thailand.

He was taken to Tah Chat Chai Police Station for further questioning.