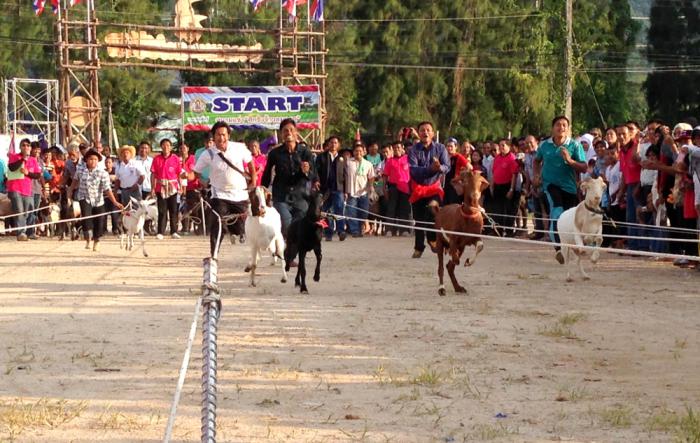 PHUKET: Crowds of fair-goers hastily gathered last Saturday around the racing lanes at the National Goat Fair in Cherng Talay as anxious farmers corralled their hairy contestants toward the starting line. The ominous, stubborn rain clouds had parted just in time for the long-awaited goat races to begin. Even the sweltering heat could not stifle the excitement among children and adults alike as the first group of goats stood at the ready, bleating in anticipation.

Governor Maitri Inthusut kick-started the first round with a swift wave of a checkered racing flag and off they – actually, just one – went! The race got off to a rocky start, as only one of the goats seemed to know what was at stake. The others did not appear to have their heads in the game, and by the time they realized what to do, the little brown goat in lane one had already won. The goat’s jubilant young owner ran to meet him at the finish line and proudly stood by as spectators snapped pictures of the triumphant winner.

Round two began soon after; the goats got bigger and the racing got faster. As soon as the flag waved, the goats barreled forward. Contestants in lanes two and three went head to head as the crowds clapped and cheered, and the two stayed neck and neck until the last second of the race. The slight, but quick goat in lane two pulled out a win, beating out his fellow competitors.

Competition in the third round was even fiercer than before, and the contestants shot off as soon as they were signaled by race marshal Governor Maitri. In fact, the race was so close between goats in the first three lanes, with only a brief lead by lane three, that it was unclear who won. Race referees decided to hold a third-round rematch in the hopes that a clear winner would emerge.

The tension before the ultimate, re-matched race was palpable, and the contestants dug their heels into the dirt with a final wave of the flag. Goats in lanes two and three took an initial lead, but lane three fell back in the final stretch, allowing lane two to take the gold.

The National Goat Fair’s highly-anticipated goat race saw a veritable pantheon of worthy competitors. Although only three left the fair enjoying their 15 minutes of fame, all of the other racers fought valiantly for the coveted title of fastest goat, and accepted defeat with their heads held high.