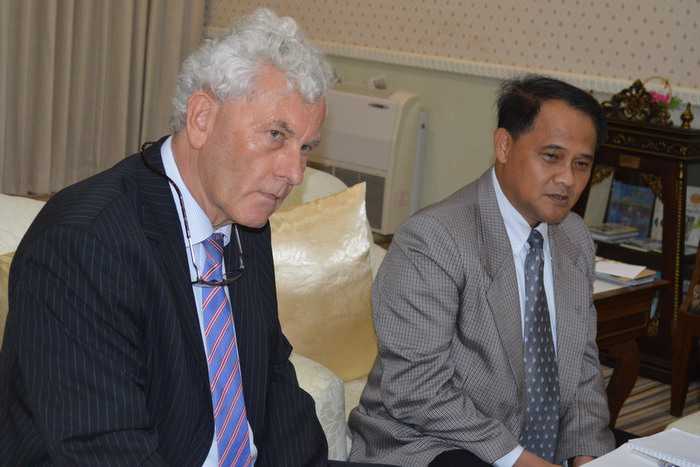 PHUKET: The Dutch Ambassador to Thailand posed some tough questions during a visit with the new governor yesterday, honing in on the island’s biggest problems and the future of Phuket’s tourism sector.

Due to numerous complaints that have streamed in to the Embassy from Dutch tourists visiting the island recently, Ambassador Joan Boer focused mainly on the high cost of taxis in Phuket and solutions to the umbrella and sun-lounger conundrum.

“About 200,000 tourists from the Netherlands come to Phuket every year. This is not a lot, but I cannot ignore their concerns,” Amb Boer told the Phuket Gazette.

“[I am] hoping that we will find solutions, and hoping that those solutions will lead to a better, safer Phuket, with many more tourists.” 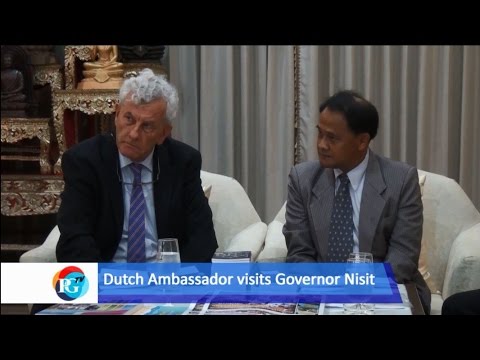 Amb Boer, who says he has monitored the tourism sector closely during his three years in office, warned of the possibility of tourists not returning to Phuket if changes are not made.

“Most tourists who come to Phuket enjoy their holidays, but we cannot deny that some have faced trouble. I believe that if we work together, we can do something about it and make a better Phuket.

“I am trying to help find solutions, because both sides want Phuket to be the best tourist destination in Thailand.”

Governor Nisit Jansomwong told Amb Boer that Phuket authorities were trying to find solutions to the island’s issues, but that change would take time.

“We are doing our best to fix all of our problems. However, it is a step-by-step process,” Gov Nisit said.

Gov Nisit explained to Amb Boer exactly who had taken charge of which issue and what had been accomplished so far.

“Jet-skis are being monitored by the Phuket Marine Office. If they break any regulations, the Marine Office will consider revoking their permits. This could mean that there may not be any jet-skis in the future,” Gov Nisit said.

“However, like I said, we can only take these things one step at a time,” he said.

As for bringing back umbrellas for incoming tourists, Gov Nisit expects to have an answer soon.

“The beach cleanup was an order from the National Council for Peace and Order [NCPO]. We had to follow it,” he said.

“However, we are trying to find a way to bring umbrellas back, as we are well aware that many tourists want them. We will have a solution soon.”

Amb Boer ended the discussion with a promise to return in a few months to check on the progress being made by Phuket authorities.

“We know that these are difficult issues. We just hope that a solution is found as soon as possible – one that will lead to a better Phuket,” Amb Boer said.

“There will always be issues in the tourism sector. Tourists want to have a good time, and we want them to have a good time. This is a great place for them to come, and I am thankful that Governor Nisit is willing to do what it takes to make everyone happy.”

Phuket health officials: no need to panic over plague outbreak