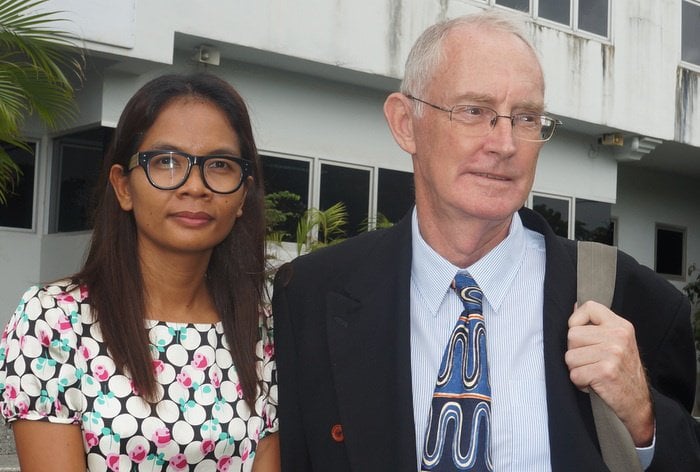 PHUKET: Alan Morison and Chutima Sidasathian, of local news blog PhuketWan, will hear the verdict on September 1 for charges of criminal defamation and violations of the Computer Crimes Act following the conclusion of the trial yesterday.

According to the court hearing, the charges stem from a report published on July 17, 2013, which contained excerpts from a Reuters special report alleging that some Thai naval security forces worked with human smugglers to profit from the exodus.

In April last year, Mr Morison and Ms Chutima were charged for the report and released on bail. Also charged was Big Island Media, the operators of PhuketWan (story here).

The case was brought to court after numerous failed attempts to negotiate, confirmed Capt Pallop Komalodaka of the Royal Thai Navy, who was authorized to file the complaint to police against the suspects.

“The suspects published [alleged] false information, which is against the Computer Crimes Act Section 14,” Cdr Thanom Lumzaie, deputy chief of the judge advocate division of the Third Naval Area Command, explained after the trial. “Moreover, the information published damaged the Navy’s reputation.”

Cdr Thanom went on to point out that such a case, which could even be derived from a Facebook post, is straight forward.

“It is the same as if you posted something on Facebook and ruined a person’s reputation. If they want, they can sue you. It’s that easy,” Cdr Thanom said.

The first day of the trial was on Tuesday (story here). The following day, the defence team began its case, during which Mr Morison and Ms Chutima gave their testimonies and denied the charges. On Thursday, a series of expert testimonials for the defence was heard.

The witnesses were not cross examined by the prosecutor on either day.

“We feel a great sense of relief that the Thai judges are being so open and transparent,” Mr Morison said. “We are very keen to see what the verdict is on September 1, of course.

“To me, now that the allegations have been repeated in open court, an investigation should take place into the Reuters claims. And see whether there’s any truth in the claim or not.”

Mr Morison went on to praise his legal team and the way the court had handled the case.

“I couldn’t be more proud of the way Thailand handled this case,” he said.