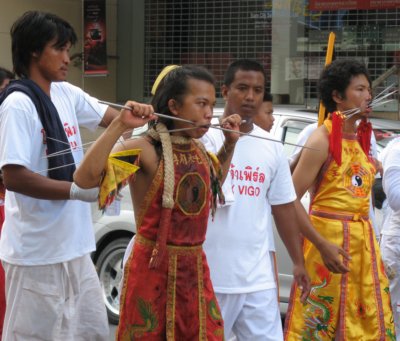 PHUKET CITY: Phuket Vegetarian Festival 2007 is well underway, with Kuan Te Kun Shrine, locally known as Sapam Shrine, this morning conducting the first of the nine street processions that are among the festival’s major highlights.

The Sapam Shrine procession started at 8 pm at Nakhon Rd, behind the Phuket City Police Station. Amidst the cacophony of firecrackers set off to drive away evil spirits, some 50 mah song (“entranced hoses” or spirit mediums) set off with their handlers on the way to Saphan Hin, the traditional end point or halfway point of all the Vegetarian Festival processions.

Crowds of onlookers, including perplexed foreign tourists, lined the streets of Phuket City to catch a glimpse of the spectacle, especially the mah song.

As in years previous, the mediums skewered their cheeks with a creative variety or implements including swords, sticks and even a long length of heavy-duty garden hose used to support a banner announcing the name Sapham Shrine.

Clean-up crews from Phuket City Municipality did a good job following the procession and cleaning up all the paper fragments left behind from the thousands of exploded firecrackers.

As in past years, Phuket City Police have warned residents that only traditional firecrackers in strips should be used in the processions.

The next street procession starts at Lim Hu Tai Su Shrine (Samkong Shrine) on Yaowarat Rd about 7 am tomorrow.

Click here for the full schedule of street processions.

For more information about the Vegetarian Festival visit the event’s official website www.phuketvegetarian.com and click on the calendar for a complete list of daily events such as fire walking, knife-blade ladder climbing – and more.

Readers with exceptional photos are invited to send them to editor@phuketgazette.net for inclusion in the Phuket Gazette.

Another attack in Rawai, Aussie and Brit mugged