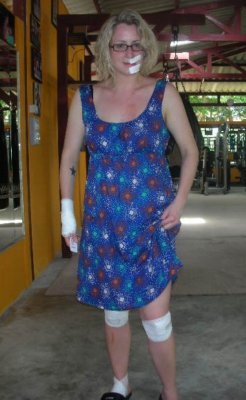 RAWAI: An Australian woman was pulled off her motorcycle and robbed at gunpoint early Sunday morning in the same area where Norwegian tourist Simen Knudsen was killed two weeks earlier.

The victim, 27-year-old Australian Sooz Lomas, arrived in Phuket about two weeks ago to learn Thai boxing at the Rawai Muay Thai camp.

About 2:30 am on Sunday, Ms Lomas left the nearby Icon Bar with an English friend named Paul, also 27. As Paul drove the motorbike and Ms Lomas rode pillion, the pair were approached from behind by two men on another motorbike.

Ms Lomas said the attack happened off the main road from Rawai to Kata.

“I don’t know the roads very well and neither did the guy who was driving. I think we may have taken a wrong turn, because we ended up somewhere that was very dark. I think we were followed from the bar,” she said.

“It was very soon after we left, and there were a bunch of people standing outside as we were leaving. We were going slowly, about 30kmh. Then two guys came up from behind, on the right. One of them reached out and grabbed my bag, pulling me off the motorbike.

“I came off and hit the ground face first, while the driver skidded along for a bit. I hit my head, so I was a bit confused about exactly what had happened. One of the attackers went up to Paul, pointed a gun at him and asked for money. So he emptied his pockets.

“They both had guns. I was lying face down on the ground. I didn’t really know what was going on, but one of the guys came up to me saying, ‘Money! Money! Money!’ I didn’t want to give up my bag straight away. Then I felt my bag being grabbed and they cut the strap and pulled it off me,” Ms Lomas said.

Once they had taken all her possessions, the gunmen left quickly, getting away with about 1,500 baht in cash, credit cards, a mobile phone and camera – in addition to the money stolen from Paul.

Ms Lomas, who is on her first trip to Thailand, said she didn’t get a good look at her assailants. “Once I saw they had a gun, I didn’t really look at anything else. It was scary. I had never seen a gun before so it was one of the most frightening experiences in my life,” she said.

Cut and bruised from her hard fall, Ms Lomas and Paul returned to Rawai Muay Thai, where the manager took them to the police and then to hospital for treatment.

Since that night, police have twice been back to the camp to question her about the attack, but Ms Lomas was not sure if the officers were from Chalong Police, which has jurisdiction in this case, or Phuket City Police, who have been assigned by provincial police to take over the high-profile Knudsen murder investigation that took place in the same vicinity.

Chalong Police earlier announced they had arrested a young suspect who had admitted to killing Mr Knudsen, with the help of a brother and a friend. The other two suspects were arrested soon thereafter by Phuket City Police, who after questioning ruled out all three as suspects in the Knudsen murder.

Ms Lomas said the attack has not only changed her vacation plans, but also the way she feels about traveling in Thailand.

“I have certainly been more careful since. I had heard stories of things like this happening. There was a Norwegian guy [Mr Knudsen] who was killed not long ago and the police had said that this had happened a few times recently. It does make me think twice about coming back to Phuket.

“I have heard that people with handbags are being targeted, so I am not going to carry one anymore. A lot of the people at the gym are really paranoid now; lots of the girls at the camp are quite scared,” said Ms Lomas.

Her training at Rawai Muay Thai was going well until the attack, which left her covered in bruises and abrasions and forced her to cease training.