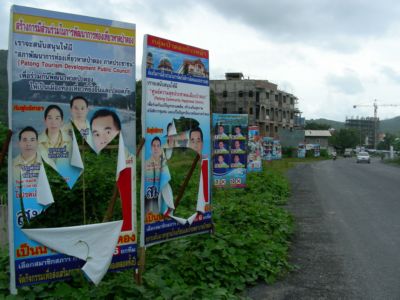 PATONG: Ahead of the Patong municipal election on Sunday, many of the campaign posters of mayoral candidate Somkiet Kuru, of the Patong Gao Na (Progress) party, posted throughout the resort town, have been slashed by vandals.

Khun Somkiet is the only mayoral candidate opposing Pian Keesin, who is campaigning for his second consecutive term as mayor.

Kathu Police Superintendent Col Grissak Songmoonnark said “The media should not allow themselves to become political tools. The campaign posters have been slashed for at least more than a week.

“I would rather not comment in depth on the issue because there are many possible reasons the posters were slashed, depending on who slashed them. Giving quotes to the media might mean that both the police and the media could be dragged into a political game by an unknown puppeteer,” he added.

“There are dozens of people hired to lobby for each candidate, which means that the number of potential suspects is very large.

“It is also strange that so many slashings could occur all over Patong, and yet there are no witnesses whatsoever to give any clues as to who the culprit might be,” Col Grissak said.

He added that K. Somkiet had filed a complaint with the police. “But that doesn’t mean that the other candidate arranged the slashings. As yet, we have no solid leads as to who the perpetrator is,” he said,

“In order to be neutral, neither candidate should be blamed and the media should not have an opinion on the issue, at least until the election is over, unless they want to fall victim to political games that could have been masterminded by anyone,” he added.

In accordance with election law, there will be a ban on the sale and distribution of alcohol in Patong from 6 pm on Saturday to midnight Sunday.