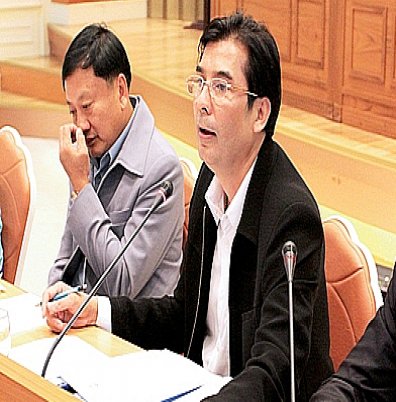 PHUKET: Government spokesman Prompong Nopparit has voiced his support for a 10-billion-baht extension of train lines from Surat Thani to just north of Phuket.

Currently, rail passengers and freight bound for Phuket can travel only as far south as Surat Thani.

The extension would be about 160 kilometers long, stretching from Keereerat District in Surat Thani province to Baan Thanoon in Phang Nga – or even as far south as the Sarasin Bridge.

Regardless of the final destination, the move to extend the rail network to support Phuket received his full backing, he said.

Mr Prompong made his announcement at a meeting of high-ranking officials held to finalize which projects will be presented to the Cabinet at their meeting in Phuket next month.

“I also suggest presenting the idea of lengthening the runway at Phuket Airport to the Cabinet. The 5.7bn baht budget to boost the airport’s annual capacity to 12.5mn passengers by adding 15 more aircraft gates has already been approved. So we should use this opportunity to present the runway extension scheme to Cabinet,” he said.

“Every April Phuket faces a water shortage. So we should think about an external water supply from Phang Nga and Krabi to support Phuket.

“Having a convenient transportation system and reliable public utilities will improve the lives of Andaman residents and support the tourism industry,” he said.

four Andaman provinces wish to be presented to the Cabinet,” Governor Tri said.

“I believe this is worth the investment,” he added.

From a wider perspective Mr Prompong noted that there were many projects outlined at the meeting that he would present to Cabinet.

They included the widening of a 200km stretch of the Petchkasem Highway to four lanes from Phang Nga to Chumphon at a cost of about 4bn baht and the addition of a new Prince of Songkla University campus on 300 rai (480 square kilometers) of land in Phang Nga.

“These are projects that will be most advantageous to people in the Andaman region,” Mr Prompong said.

Phuket Governor Tri Augkaradacha, who chaired the meeting, announced that the Phuket projects that will be presented to Cabinet next month are the Airport-Phuket Town monorail, the Patong tunnel, the Phuket Airport expansion, the Convention and Exhibition Center, the Klong Koh Pee Road improvement project, the Central Festival Phuket and Tesco Lotus Phuket underpasses and the Phuket Hospital expansion.

“The budgets for all these projects will be discussed at a later meeting,” he added.

Present at the meeting were Phuket Senator Thanyarat Achariyachai, who is currently chairwoman of the Senate Committee on Tourism, as well as Phuket MP Raywat Areerob, Pheu Thai party list MP Kohkaew Pikulthong and representatives from Phang Nga, Krabi, Trang and Ranong.