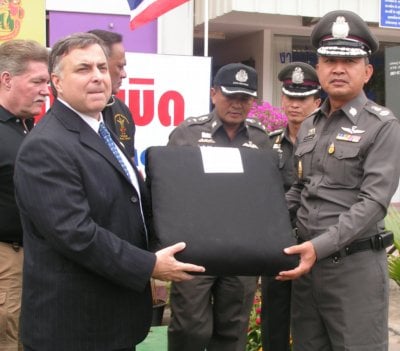 Scott Bernat, Chief of the Naval Security Force Protection Detachment at the US Embassy in Bangkok, told the Gazette that the blanket – technically known as a “bomb suppression blanket” – is made of Kevlar and light enough to be carried and deployed by a single officer.

A bomb blanket is designed to be used by first responders if there is a report of a suspicious package.

“It’s a device that is used when your not sure if an object is a bomb or not. The police can take it with them and spread it out over the top of the object. If an explosion happens underneath before explosive ordnance people arrive to disarm or take it away, then it minimizes the damage that could be caused by the shrapnel from the bomb to people in the area,” he said.

Bombs in Thailand are often packed with nails or other metal objects to maximize carnage, he said.

The 66,000-baht blanket is the third given by the US Embassy to police in Phuket, who have also received training in their deployment. The other two blankets are large enough to be placed over motorcycles but are too heavy to be carried by a single person, he said.

Mr Bernat, who coordinates security efforts during port visits to Phuket and Pattaya by US Navy and Marine personnel, said there are currently no US Navy ships scheduled to come to port in Thailand.

Interest in bomb blankets has increased following the violence in the Deep South, where bomb attacks have become common.

In April, Narathiwat Provincial Police Deputy Commissioner Col Napadol Phueksomol lost his left leg while leading a bomb disposal unit to defuse a roadside bomb. He was unprotected at the time.

Gen Decha said the bomb blanket was another demonstration of the good cooperation between the US Embassy and Royal Thai Police in ensuring security for Thai people and the millions of foreign tourists who visit Phuket annually.

The bomb blanket provides greater protection to police and the public than used car tires, which in Thailand are commonly placed around suspicious objects until bomb experts can arrive to investigate, he said.