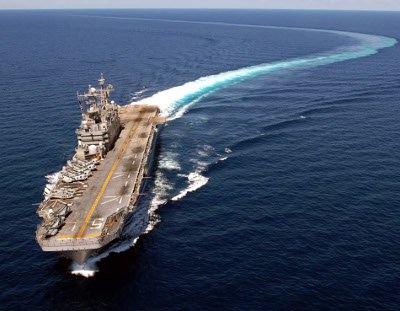 PHUKET: The USS Peleliu dropped anchor in Phuket today, bringing along a complement of 960 sailors and about 1,900 Marines.

The Peleliu, with its 254-meter-long and 40m wide flight deck, helped evacuate nearly 9,000 displaced persons and deliver more than 2,715 tonnes of food aid and relief supplies.

Before their scheduled departure on Wednesday, some crew members will join local volunteers in renovating two schools in Phuket and a charitable foundation in Phang Nga.

“The Comrel (‘community relations’) projects will be at the Home & Life Phang Nga Foundation, just over the Sarasin Bridge in Phang Nga, Wat Thepnimit School in Wichit, and at Wat Sawangarom School in Rawai,” said Brad Kenny of the Rotary Club of Patong Beach.

Mr Kenny was recently awarded the the prestigious Sahataya Naval Insignia and Certificate from the Royal Thai Navy for his participation in over sixty Navy Community Relations “Comrel” and Handclasp projects over the past few years.

Repair and safety improvement of playgrounds, painting of classroom buildings, river erosion control and planting of fruit trees all await the US servicemen and the local volunteers taking part in these Comrel projects, Mr Kenny explained.

Over the past four years the US Navy and Marines have conducted 63 Comrel projects in the greater Phuket area, averaging 15,000 baht per project in cash expenditure – plus a lot of manpower.

The Rotary Club of Patong Beach has been the coordinator and sponsor for all the projects, he added.

This is the USS Peleliu’s second visit to Phuket; the first was in June 2006.