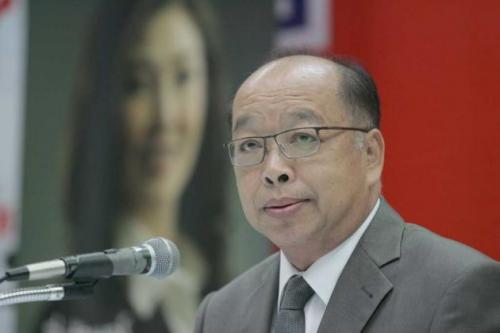 More than 1,700 Rohinyga migrants have been held in Thailand for illegal entry after landing in the Kingdom from the border areas of Bangladesh and Myanmar. They said they were seeking better lives.

The initial number was 2,000 but a few hundred broke out of their crowded cells and got away.

“We have already taken care of [the refugees] for six months and are seeking new ways to handle them [and protect their] humanitarian and human rights,” Surapong told reporters.

The Social Development and Human Security Ministry has proposed to relocate the Rohingya from immigration detention centres in the southern region to more space somewhere under control of the Interior Ministry, he said.

Surapong and Wunna Maung Lwin discussed the possibilities for resettling the Rohinya. Surapong said the Thai government would have consultations with the United Nations High Commissioner for Refugees (UNHCR) on the matter.

The Rohingya issue came to international attention four years ago when thousands in boats arrived to seek better lives in Southeast Asia.

In Myanmar, sectarian conflict that erupted last year after clashes between Rohingya Muslims and Myanmar Buddhists brought the issue back into focus. Thousands of Rohingya had been in refugee camps on the Bangladesh border for years and sailed out from there.

Thailand wanted to deport them to their places of origin but their nationality was unclear for a long time; whether they were Bangladeshi or Myanmar.

Bangladesh has finished its verification of Rohingya nationality now while Myanmar is continuing with the task, according to Surapong.

Thailand would also report to the Organisation of Islamic Cooperation (OIC), which had earlier voiced concern over the plight of the Rohingya. Asked if Asean would get involved in the Rohingya question, Surapong said Myanmar did not want outsiders working on the issue which it deemed an internal affair.

“We have already launched a probe and found that none of the department’s officials belongs to human-trafficking gangs,” Manopat said.

He admitted, however, that Rohingya had been hidden away in some parts of the Mu Koh Tarutao National Park.

The Rohingya are a Muslim minority from Myanmar, where they are denied citizenship. Many have fled their homeland in recent years following violent clashes with Buddhists.

“We are now dismantling tents used by the illegal labour agents. We will also increase patrols,” Manopas said.

He said the chiefs of the national parks in border zones had been instructed to pay close attention to secluded areas of the parks because they were at risk of being used by human traffickers.


Uniformed man killed Akeyuth: Witness
The Nation / Phuket Gazette
PHUKET: Suwat Apaipak, the lawyer of slain businessman Akeyuth Anchanbutr, revealed yesterday that the victim’s driver Santiphap Pengduang has retracted his initial confession and is now saying that he and his accomplices were given Bt3 million to kill Akeyuth. The suspect has also said that a “uniformed person” killed the outspoken businessman using a “special method”.

Suwat also announced that he was withdrawing from the case as he wasn’t being paid and received death threats on a daily basis.

When Santiphap asked to meet Suwat at the Bangkok Remand Prison, Suwat sent another lawyer on his behalf. The suspect then allegedly told the lawyer that Akeyuth’s murder was not a simple robbery but an assassination in exchange for Bt3 million.

Suwat cited Santiphap as saying he had tried to kill Akeyuth twice before but failed, hence the person who hired them had a “uniformed person” kill the businessman using a “special method”.

The lawyer went on to say that he had asked city police chief Pol Lt-General Camronwit Toopgrajank and investigators how Akeyuth’s murder could be considered a robbery when the culprits reportedly threw the valuables in the river. He also asked how the hard disk of security camera in the businessman’s house could have gone missing.

Meanwhile, Metropolitan Police deputy chief Anuchai Lekbumrung insisted that the investigators were working on the case based on the evidence present and the National Human Rights Commission (NHRC) could hand in any useful information it might have.

He also pointed out that the investigation team’s results did not contradict the NHRC’s results, adding that the police was ready to provide explanations.

Insisting that the police had enough evidence to prosecute the four suspects in police custody and that the case was a robbery, he said the team would present its results to the public prosecutor this week.

Anuchai also said he had not heard about Akeyuth’s relatives being unhappy with the investigation and that they planned to ask the Central Investigation Bureau take over the case, adding that they were within their right.


Police unbowed in plan to check Line chat records
The Nation / Phuket Gazette
PHUKET: Despite continued public criticism and Prime Minister Yingluck Shinawatra’s remark that the government fully respected people’s rights, the police commander of the Technology Crime Suppression Division (TCSD) yesterday insisted he would press on with the idea of checking people’s use of the globally popular Line chat application.

However, Pol Maj Gen Pisit Paoin said his division would only check for information on people suspected of committing a subversive act or crime online, and not on all Line users’ conversations.

Pisit said representatives from all countries at a meeting of the International Criminal Police Organisation (Interpol) believed that illegal activity on websites and smart-phone applications was likely to increase, and that all countries would need to plan measures to prevent such crime.

The TCSD has a duty to protect the country and bring technological crime under control, he said. Therefore, it should lay down measures to protect against future threats, he insisted.

There are currently 20 million Thai Facebook users, while the Line application has some 15 million Thai users. It is, therefore, likely that some of these people will use these programs to stir up trouble and engage in crime, he said.

Pisit said his division would not eavesdrop on social-media users without authorisation, as it would need the consent of mobile operators following a court order.