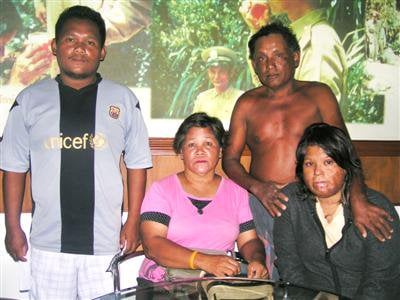 PATONG: The man who set alight a beach masseuse at Loma Park last year returned to the scene of his crime yesterday morning, where he was immediately assaulted by the victim’s father and brother. The attack was quickly stopped by Kathu Police, who released the pair after fining them 500 baht each.

Few Gazette readers will forget the horrific tale of young Saijai Phromdaen, whose life was forever changed in mid-February last year when she was doused with paint thinner and set on fire by 53-year-old Somwan Kaewkhaaw [formerly reported as Sombun Kaewkhaaw, age 53], a glue-addicted vagrant from Chumphon’s Muang District.

Ms Saijai, 21 at the time of the attack, underwent a series of skin grafts and spent many months in hospital. Sadly, despite best efforts by doctors and funds raised from Gazette readers, she was left with permanently disfiguring scars on her face and arms.

The pair had assaulted Somwan with punches and strikes with a beach umbrella at about 8 am. The incident was recorded in the Kathu Police daily log, but no criminal charges were filed.

Somwan, this time the victim, was struck in the head, right arm and right leg before police broke up the fracas.

Mr Anurak told the Gazette he had noticed Somwan walking around Loma Park earlier that morning and told police that it was not safe to let a madman like Somwan walk about in a public area.

Loma Park, with its trademark dolphin sculptures and children’s playground, is probably the most famous tourist attraction in Patong after Soi Bangla, home of the island’s nightlife entertainment scene.

Mr Anurak said the assault was motivated by sheer anger and frustration that the police allowed him to stroll around the area freely.

“I could never forgive that madman for the rest of my life, after what he did to my sister; I couldn’t control my emotions. It tortures me every time I think about what he did to my sister. It is like a bad dream that never ends. Her husband has left her because she isn’t attractive anymore, and now nobody will give her a job. She can no longer live like a normal person,” he said.

No longer able to work as a masseuse, Ms Saijai now helps her mother selling drinks to tourists in the same area where she was burned. She now has to be careful to keep her skin covered at all times, to protect against both solar radiation and curious stares.

“I need the police or some other kind of government officer to keep people like this from public areas, where their inability to control themselves poses a danger to others,” Mr Anurak said.

Kathu Police Duty Inspector Lt Col Sophon Borrirak, who was in charge of the criminal case against Somwan, had earlier informed him (Anurak) that Somwan was found guilty by the Phuket Provincial Court of attempted murder and was sentenced to 18 months in prison for the attack on his sister, Mr Anurak said.

Lt Col Sophon told the Gazette that it was likely that Somwan had already served his sentence and been released as a free man, but that fact could only be confirmed by the court and prison system.

The Gazette has been unable to confirm the exact date of his release with either the Phuket Court or Phuket Prison.

Saijai’s mother said police had earlier shown her the results of a psychiatric evaluation that concluded her daughter’s attacker was mentally sound to stand trial.

“But we are not happy to see him back in the same area where he lit my daughter on fire,” she said.

After Ms Saijai’s father and brother paid their fines and were released, Somwan stayed behind at the station. He was later released, as police had no legal means of detaining him.

Police initially told the Gazette they would call “a unit of a government agency” to come and take care of him, but did not specify which one.

Also at the station was Ms Saijai, now 23.

Through tears brought on by the sight of her attacker, she said, “I’m fine, but I worry about my daughter Ice, who is now four years old. She always asks me when I will get better and if my scars will disappear. It hurts me every time.”