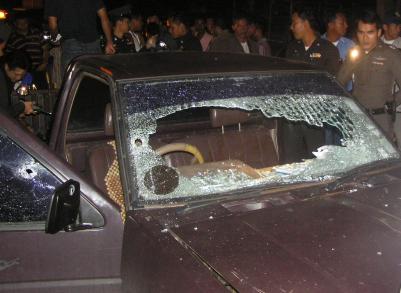 PHUKET TOWN: Two men were killed last night after a gunman opened fire on their pickup truck while they were waiting at traffic lights at the junction of Wichit Songkhram Rd and the bypass road, across from the Thainaan restaurant. A witness, who said the shooting happened about 7 pm, told the Gazette that he was riding his motorbike from Big C toward the intersection. “About 50 meters before the lights I heard two sharp cracks to my immediate right. I looked over and saw a guy with an assault rifle pointed at the back of the cab of a pickup truck. “As I was looking at him, he moved forward a step or two from his initial firing position next to the left rear wheel, probably to get a steeper angle for the next couple of shots, and then fired again.” Phuket Provincial Police Commander Maj Gen Veerayuth Sittimalic, who is in charge of the police investigation, today told the Gazette, “Jutha Na Thakuatoong, 38, was killed after being shot in the head, while the driver of the pickup, Somchai Wutthi, was seriously injured by bullets in his back.” K. Somchai was rushed to Wachira Phuket Hospital, where he was pronounced dead at 11:55 pm. Gen Veerayuth said that police believe the killer was a hired assassin, who followed his victim before moving in for the kill. “He shot the tire first, then the [intended] victim and then the driver. Seven 9 mm shells were found at the scene,” he said. The gunman and his driver then fled on a motorbike with no registration plates, southbound along Chao Fa West Rd, he added. Gen Veerayuth said that K. Jutha owned many tourism businesses, including a dive shop and a Phuket-based tour company, and that police have not ruled out a business conflict as a possible motive for the killings. “It seems that [K. Jutha] didn’t know that he had enemies,” Gen Veerayuth said. “We are continuing our investigation into the motive [for the shooting].”