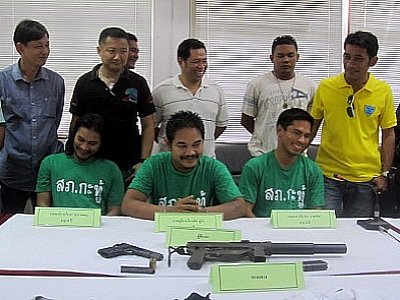 Nat “Chit” Nakpetch, 31, from Kathu, Somnuek “Wae” Suwanthanoo and Poochit “Max” Pookham, both 29 and both from Nakhon Sri Thammarat, were presented to media at Patong Police Station today.

However, he explained that the two victims were gunned down following a “misunderstanding”.

“Hatchakorn Puekpol, 36, from Samut Songkram, was murdered and Somkid Klongsingkram, 32, was seriously injured in the attacks,” said Maj Gen Pekad.

Mr Hatchakorn’s sister, who asked not to be named, told the Phuket Gazette, “A few days ago two teenagers [both friends of Hatchakorn] had a fight with some guys at the Isarn Lad Phrao Karaoke.

“The next day Mr Nat called Hatchakorn, who went to talk a truce between Mr Nat and the teenagers,” she said.

The talks did not go well.

“During the talks, one of the teenagers fired his gun into the air,” she explained.

This led Mr Nat to believe that Mr Hatchakorn had asked the teenagers to frighten him, she added.

“On Saturday night, Mr Nat called my brother again, asking to meet. I asked him not to go, but he went anyway because he said he was innocent,” she said.

“I don’t know Mr Somkid or why he was involved,” she said.

Furious, she added, “I am so angry with one media report, which said my brother was ‘mafia’ and that he ‘collected’ money from people.

“That is not true. He was not mafia,” she said.

“The three suspects were in a Chevrolet sedan waiting near the four-ways where Nanai Road joins Pracha Nukroh and Phang Muang Sai Kor Road.

“As Mr Hatchakorn and Mr Somkid rode by, both on separate motorbikes, the men in the car followed.

Mr Hatchakorn was shot three times: in the back of the head, in the left shoulder and in the right chest.

“Mr Somkid tried to escape, but the gunmen caught up with him in front of a Family Mart off Nanai Road.

“Somkid thought he was safe there, but the men followed him and Mr Nat shot him with an 11mm handgun and Somnuek opened fire again with the MC .45,” said Lt Thanakrit.

He did not confirm the extent of Somkid’s injuries, other than he was shot several times.

After receiving reports of the shootings, police promptly cordoned off the area.

“We caught all three suspects within an hour after receiving the first report around 1:30am,” he added.