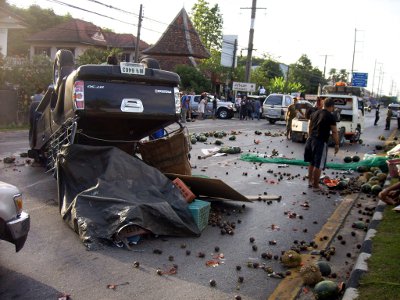 PHUKET: A three-vehicle collision near the Heroines’ Monument in Phuket left two dead and many injured this morning.

The two dead were staff members at the well-known Muslim Witthaya School in Koh Kaew.

Also killed was Oranong Junthanit, who was sitting in the back row of the van.

A member of the school’s finance division, Mrs Oranong also served as chaperone to the young students on their way to school.

At about 6:30am, the van was heading southbound on Thepkrasattri Road as normal when it was involved in a collision with a pickup truck laden with watermelons, durian and other fruit.

The exact details of the situation leading to the crash are still under investigation, but the impact of the collision caused the pickup to overturn, spilling its cargo onto the road.

The accident occurred in the southbound lane, near the U-turn north of the monument.

The third vehicle in the crash was a motorbike that ended up in a drainage ditch. The female driver was sent to Mission Hospital for minor injuries.

Miraculously, none of the young students inside the van were seriously injured in the crash. More than 10 students were in the van.

The driver of the pickup and his one passenger also escaped without serious injury.

However, most of the people involved in the accident were taken to hospital for treatment of minor injuries.

A rescue worker at the scene said the carnage could have been far worse if the children had been traveling by songthew (modified pickup) instead of a van, as the children would have been thrown forward into the back of the cab at high speed.

The van seats cushioned the impact and allowed most of the child passengers to escape with cuts and bruises, he said.

The accident caused long tailbacks on Thepkrasattri Road throughout the morning.

In another road accident death in Thalang last night, a man was killed instantly when he was hit by a car on the road from Heroines’ Monument to Pa Khlok, near the Sitthisoonthorn Bamroong School in Baan Phakcheed.

Witnesses said the man came to a mom-and-pop store at the scene to buy alcohol.

Learning that the shop did not sell spirits, he tried to cross the road to buy from a shop across the street, they said.

He died instantly of massive head trauma when he was hit by a Honda City.

The force of the impact left the windshield shattered and bloodstained.

When police led by Thalang Police Duty Officer Praman Yomkaphan arrived at the scene, they found the car parked by the side of the road and the female driver crying.

The deceased had no identification and local residents had no idea who he was.

Police turned the body over to Kusoldharm Foundation workers who took it to the Thalang Hospital morgue.

Anyone who may know the identity of the deceased is urged to call Thalang Police at 076-311123.