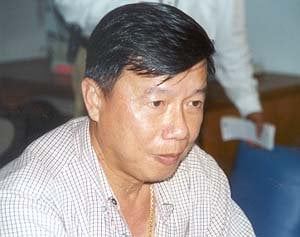 PHUKET: Two senior members of Phuket’s business community were called to Phuket Town Police Station today for questioning about dubious land titles. About 50 officers from the Crime Suppression Division (CSD), the Forestry Police, Phuket Town police, the National Parks Department and the Royal Thai Navy, armed with warrants from the court, also searched four homes at 5 am. Questioned by police were Boonkeng Srisansuchart, 53, the owner of the Srisuchart Grandview development and Srisuchart Transportation, and land dealer Supharp Saksritawee, 68. The two men’s homes were searched, along with a house in Srisuchart Grandview owned by former provincial land registration officer Thawatchai Anukul, who is being sought by police for corruption. Another house owned by Thawatchai, in Land and Houses Park, was also searched. Police seized hundreds of land documents from K. Supharp’s house and more from K. Boonkeng’s home. They also took in for questioning a woman named only as Isala, who was found at Thawatchai’s house in Srisuchart Grandview. This morning, Pol Lt Gen Pansiri Prapawat, who is in charge of the land title investigation in Phuket, went to Phang Nga to look at six pieces of land belonging to the Tantipiriyakij family, which has rubber and trading businesses in Phuket. The plots apparently have suspect titles issued by Thawatchai when he was registration officer in Tai Muang. Gen Pansiri told the Gazette that the six plots, totaling hundreds of rai, appeared to have been inflated in size (see also https://thethaiger.com/news/index.asp?id=2835 ). Forestry Police accompanying Gen Pansiri inspected the condition of the land and checked the borders with GPS equipment. The general said, “We found the land encroached on preserved forest land. We will be proceeding against Thawatchai and other officers involved in this. “We will also start proceedings against investors or influential people involved. “I’m drawing up summonses for them, and they should be coming [to see my team] in a fews days for questioning. The investors we want to see now are two people who are currently in Bangkok,” Gen Pansiri explained. He added, “In Phuket the police are investigating five cases. In three of these the evidence will be sent to the National Counter Corruption Commission because it involves officers doing their jobs dishonestly. We also expect to question and investigate some people from the private sector for assisting these officers in such offenses.” He named six people as being currently under investigation – Thawatchai and fellow land officer Uru Thipthep, K. Boonkeng, K. Supharp, and businessmen Parnthong Naranong and Chamnan Pachantabutr. Pol Maj Gen Phiraphan Preamputi, Secretary of the Anti-Money Laundering Office (AMLO), who was also in Phuket today, told the Gazette “All the land with problems will be returned to the government and people of Phuket. We will complete our work as fast as possible.” He declined to go into detail as to how the land would be “returned”. Uru, 63, was arrested this morning after being discharged from Bangkok Phuket Hospital, where he had spent two nights after complaining of a heart ailment. He and Chamnan were flown to Bangkok just after noon, escorted by Maj Gen Surasit Sangkhapong, Commander of the CSD.