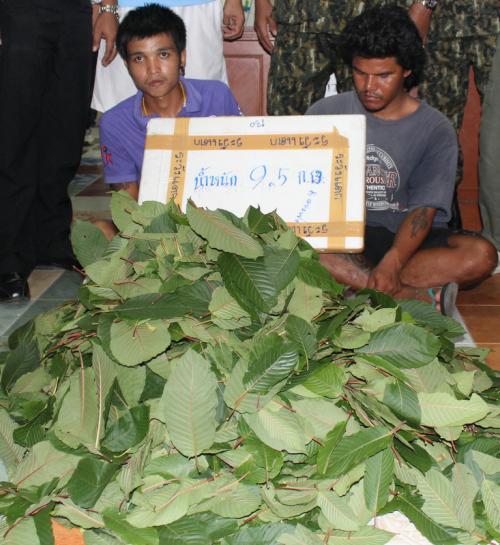 PHUKET: Police arrested two men in Wichit last night after they picked up a box of kratom leaves delivered to Phuket by bus. The box had the sender’s and the recipients’ names clearly written on it.

The bust came after an informant tipped off the Phuket Internal Security Office (PISO) that a kratom package would be arriving by bus from Chumphon on Thursday night.

Officers staked out Phuket Bus Terminal 2, and the bus and package did indeed arrive, but no one stepped forward to claim it, so officers followed the bus to a garage in Baan Borrae, on the road to Cape Panwa.

As soon as the bus pulled into the garage, two men stepped forward to collect the package and were promptly arrested.

“They are both from Phang Nga, but live in Phuket,” he said.

The leaves were packed in a foam box sent from Baan Thung Maphrao, an area just over the bridge north of Phuket.

“We believe the suspects planned to sell the leaves to teenagers to make the popular party cocktail 4×100,” Mr Thammarong said.

4×100 is made with four ingredients: kratom leaf extract, cough syrup, cola and ice. The concoction is popular among youngsters across Southern Thailand.

“Both men were charged with possession of a category 5 drug for intent to sell,” Mr Thammarong said.

“We handed over the suspects and the box of kratom to Wichit Police so they can process the arrests and track down the sender,” he added.

Phuket to get B251mn CCTV camera boost for tourist safety