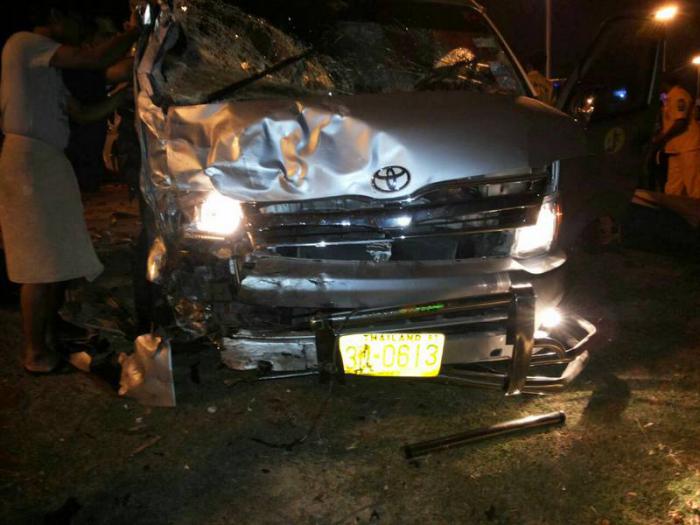 One tourist and both drivers remain in the hospital today.

A Maikhao Sakoo Co Ltd van driven by Sulaiman Udom had picked up tourists at the airport and was headed west on Phra Phuket Kaew Road to Patong when a Tez Tour Thailand van heading east lost control, crossed the median and slammed into it. The crash occured about 700 meters from the Tesco Lotus intersection.

Police were called to the scene at about 11:30pm; by then, uninjured passengers had been picked up and taken to their hotels.

“The vans slammed into each other very hard,” said Capt Panya Meeon of the Thung Thong Police.

Mr Sulaiman was trapped by the crushed door of his van. It took Kusoldharm Rescue workers 10 minutes to pry it open to get him out, said Capt Panya.

Both drivers, the tour guide and the three injured tourists were rushed to hospital. The tourists were taken to Bangkok Hospital Phuket and the Thais to Vachira Phuket Hospital.

One tourist from Qatar, Omar Mohd, declined treatment and was discharged last night. Khaled Hussein Abdelaty, from Egypt, was discharged after being checked for minor injuries and chest pains.

“Alaoui Mdaghri, from Morocco, remains at Bangkok Phuket Hospital for observation as she hit her head during the crash. However, her condition is not serious,” said a hospital staffer.

At Vachira Phuket Hospital, Mr Sulaiman is undergoing treatment and observation in the neurosurgery department and Mr Sittichai is being treated in the orthopedic department. Ms Papasara was released from the hospital last night, said a hospital employee.

Police will question the drivers once they are able to cooperate.