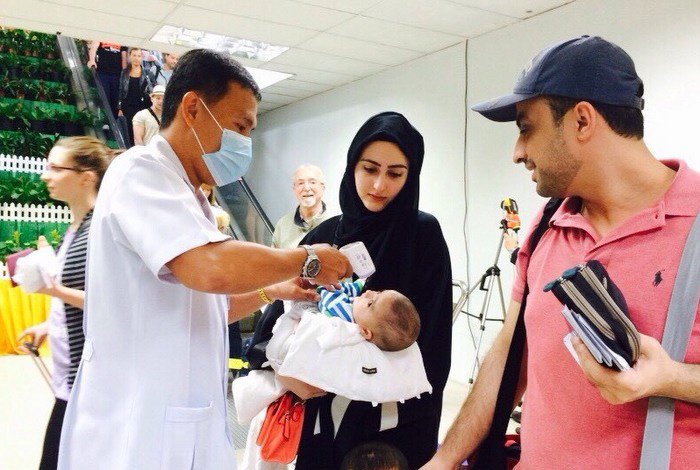 “One of the patients is a 7-month-old Korean, who has a high fever and is being treated at one of Phuket’s private hospitals,” PPHO Chief Kajohnsak Kaewjarus told the Phuket Gazette today. “The other is a Thai national who visited South Korea and arrived on the island last week.”

Mr Kajohnsak confirmed to the Gazette that MERS protocol was being followed and that the patients had been separated (Special Report here).

“I would urge the public not to be worried or panic about MERS,” Mr Kajohnsak said.

Since the island went on alert for MERS earlier this month (story here), officials have handled six suspected MERS cases. Four of them had negative test results, and the results for the other two will be revealed tomorrow, explained Mr Kajohnsak.

“However, we are still keeping our eyes on them and tracking their health,” Mr Kajohnsak said.

“So far nobody on the island has tested positive for MERS.”

Phuket Health officials have ramped up efforts earlier this month in order to identify passengers who are possibly carrying the MERS virus to the island from South Korea or the Middle East, where the virus is spreading.

“We received an order from the Ministry of Public Health in Bangkok to be on alert for the virus,” Mr Kajohnsak said. “We started checking passengers on June 9.”

The death toll from the MERS outbreak in South Korea has risen to 31 today after two more patients died from the virus, reported CNN.

A total of 181 South Koreans have been infected with MERS, and 82 patients are currently still receiving treatment, confirmed the country’s health ministry.

The outbreak has sparked international concern, stalled South Korea’s economy and resulted in more than 100,000 cancelled tourist visits to the country in the five weeks since a businessman returning from the Middle East was confirmed infected in May, reported CNN.