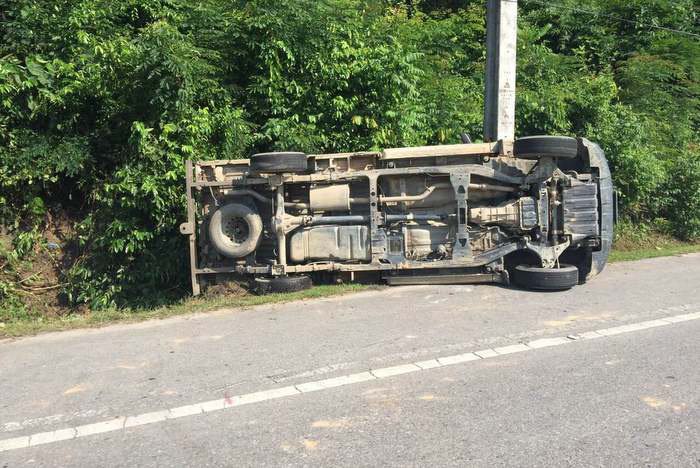 PHUKET: A dozen people were injured today when a pick-up truck hauling migrant workers and a trailer with a backhoe flipped in northern Phuket.

“At the scene we found a pick-up truck flipped over on the side of the road. Nearby, there was a trailer and a backhoe also flipped,” said Lt Kraisorn Boonprasob of Thalang Police.

“There were 12 Myanmar migrant workers riding in the bed of the truck. Two of them sustained broken arms while the other 10 received minor injuries. All were taken to Thalang Hospital.”

Upon being questioned by police, the pick-up truck driver Wisut Chuayprakong, 45, told them that after he had collected the workers from their camp he headed down Thepkrasattri Road to drop them off at their work site in Mai Khao.

“Near the PTT gas station in Muang Mai, the trailer somehow became loose and caused the pick-up truck to flip,” Lt Kraisorn said.

Mr Wisut has been charged with reckless driving causing injuries.

Kiwi wakes up from coma after accident on Patong Hill