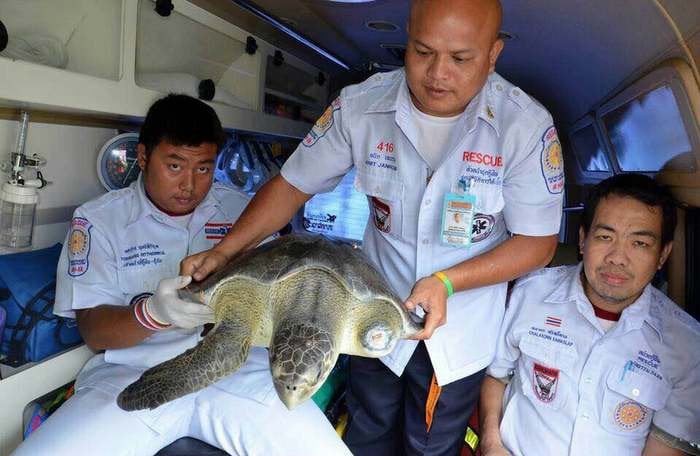 PHUKET: A female sea turtle has been safely rescued and is now under the care of the Phuket Marine Biological Center (PMBC) after it was sold for 300 baht in Cherng Talay yesterday.

The Kusoldharm Foundation received a report from Sombat Tannukrork, 48, a somtam shop owner, asking for help for an injured sea turtle that he had bought off a customer.

“The turtle weighs about 25 to 30 kilograms and has lost one of her front flippers with injuries to the back left flipper,” confirmed Patcharaporn Kaewmong, a veterinarian at the PMBC.

“The turtle was probably injured while stuck in a fishing net and may have been brought ashore to raise, as it has many gold leafs that you would find at a temple on its belly,” she added.

Mr Sombat said that he bought the turtle because he originally wanted to release it back into the sea. However, after seeing the depth of its injuries, he decided to call for help instead.

“I decided that the turtle needed treatment first, otherwise it would probably not survive in the sea,” Mr Sombat said.

Mr Sombat believed that helping the turtle was a way of making merit, as it was a Buddhist holy day.

“I am glad that we have good citizens like him. We should help each other save the turtles. If not, they will become extinct because of things such as improper fishing equipment and water pollution,” Dr Patcharaporn said.