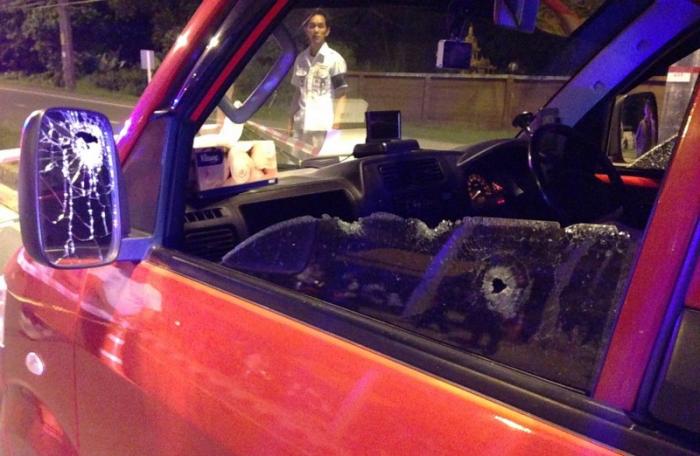 PHUKET: Police are hunting for an unknown number of suspects for the murder of the president of the Patong tuk-tuk drivers’ club earlier this morning.

Sakol Srisompoch, 57, was found shot dead inside his tuk-tuk, which was parked in the middle of the road in front of King Kong Party Club, on Phra Phuket Kaew Road.

Police were alerted to the shooting about 3:10am.

“Mr Sakol was on his way home after work when the incident occurred. There were four wounds on his left arm, one in his back and another in his chest. There were also several bullet holes in the window and windshield of his tuk-tuk,” said Capt Wattanathorn Bamroongthin of Kathu Police.

He was actively involved in leading protests by tuk-tuk drivers. In June 2013, a protest by about 100 tuk-tuk drivers won the drivers a crackdown on illegal taxis, which the tuk-tuk clan said were stealing their jobs (story here).

In March 2014, he led a 200-strong tuk-tuk driver blockade, which ended when Phuket’s top cop agreed to meet the drivers’ demands, including transferring out the Patong Police superintendent (story here).

“We have yet to learn how many suspects are involved. The motive behind the killing could have been a personal conflict, but that remains to be confirmed,” said Col Ampholwat.

The Patong tuk-tuk business has long been severely tainted with violence, overpricing and mob behavior, as well as rip-offs and other abuses, including beatings, of tourists.