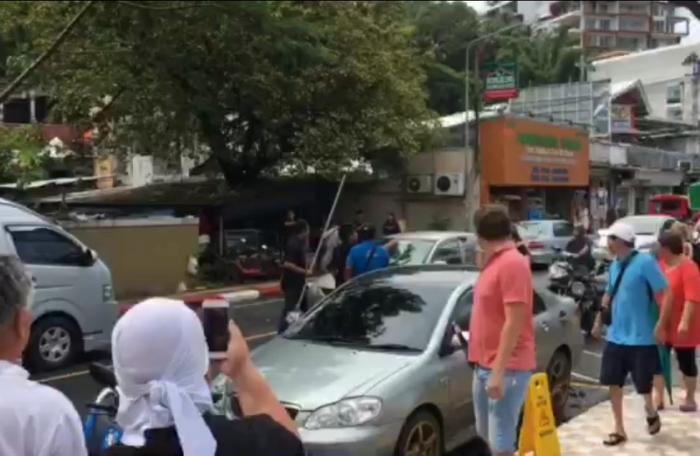 PHUKET: A Russian tourist was charged with assault after a fight broke out between him and a group of Karon taxi drivers Sunday afternoon.

The incident went viral on social media after it was captured on video by an onlooker.

The four injured taxi drivers, who insisted that the tourist started the fight, filed a complaint with the Karon Police.

“The drivers told us that a group of tourists were riding very fast on big bikes and making a lot of noise, so they called out to them to slow down so they wouldn’t hurt others on the road,” said Karon Police Captain Nipon Temsung. “That’s when they said the tourists made their way back toward them.”

One of the injured taxi drivers, Sa-nguan Sae-Ng, 36, said he was waiting for a fare with his colleagues at the central Kata taxi stand when the fight broke out.

“The tourists drove about a hundred meters past us before turning around and coming back. One of them came over and started swearing. I walked over to him just to talk, but he pushed me and knocked me to the ground,” said Mr Sa-nguan. “My colleagues tried to stop him, but he kept on ‘being physical’.”

One of the drivers, who suffered a head injury from a brick, is still under medical care at Patong Hospital, while the others have been discharged.

“We have filed our complaint and hope we can get justice,” said Mr Sa-nguan.

Police have yet to reveal the name of the tourist who was charged. They are investigating further before concluding the case.

“We are gathering more evidence in order to be fair to both sides,” said Capt Nipon.