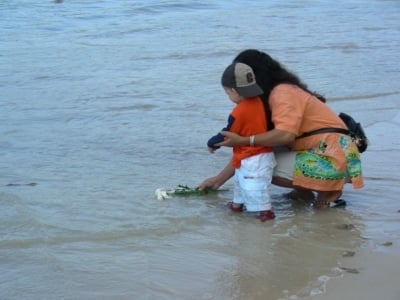 PATONG: About 200 people took part in a memorial service at Loma Park this morning to mark the third anniversary of the 2004 tsunami disaster.

The event, which began at 10 am, included a food and alms offering to 108 monks who spent an hour praying for those who perished.

Phuket Vice-Governor Tri Augkaradacha opened the service, which was organized jointly by Patong Municipality, the Tourism Authority of Thailand and the Governor’s Office.

All attendees observed a one-minute silence to remember those lost to the waves.

When the chanting was over, many people whose relatives and friends died in the disaster went to the water’s edge and released flowers as morning beach-goers looked on.

Dressed in black, German couple Mr and Mrs Hert said they came to pay their respects to a friend they saw washed away by the tsunami but were powerless to help.

In Kamala, the Phuket-Japanese Association held a similar service on the beach near the Kamala Beach Hotel.