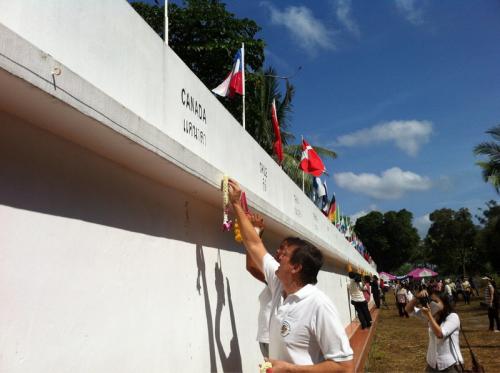 PHUKET: About 100 people joined the tsunami remembrance service at the Tsunami Memorial Wall in Mai Khao this morning to mark eight years passing since the devastating tsunami struck Phuket’s shores.

Among the attendees, only five were foreigners.

The service began with Buddhist monks conducting a mass prayer, followed by a Muslim service and then a Christian service.

After the religious ceremonies, attendees observed one minute of silence to remember their loved ones lost to the waves on December 26, 2004.

Following somber silence, attendees laid wreaths in memory of the 5,395 people killed along the Andaman coast.

The five foreigners, all Americans who live in Phuket, laid wreaths and hung garlands at each of the 45 flags representing the nations whose citizens died in the disaster.

Central to the service was the laying of flowers in remembrance of Bhumi Jensen, the 21-year-old grandson of HM King Bhumibol Adulyadej who was killed by the tsunami.

Phuket Governor Maitri is expected to lead the Light Up Phuket candle-lighting ceremony tonight at Patong Beach, where thousands of people are expected to light candles and place them in the sand as part of the annual remembrance tradition.