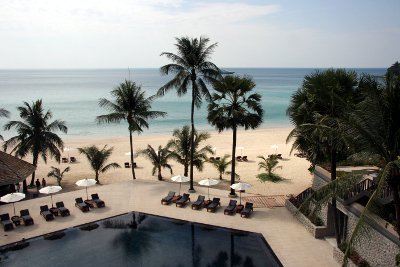 The Surin Phuket, formerly known as The Chedi, situated on Pansea Beach on Phuket’s northwest coast, is in the final stages of renovation in preparation of reopening under the new name.

As part of the project, seven guest rooms, outdoor showers and a beachfront bar have been added.

However, the beach masseuses who used to work on the beach in front of the resort filed a complaint that the new work has encroached onto public beach land.

“I have been working on this beach for more than 28 years. That was until six months ago, when a hotel representative asked me and other masseuses to stop working here,” said Pradtana Saejew, the president of Cherng Talay Traditional Thai Massage Club.

“They said they would renovate the hotel and as soon as it was finished we would be allowed to start work again. When we returned to the beach, we saw that the new buildings are on the public land where we used to set up our massage beds,” she said.

“We are here today to ask how the hotel will deal with our problem. We have been here as long as this hotel and we would like them to be fair to us too,” Mrs Pradtana added.

However, Surin Phuket representative Vachira Jairak explained to Vice Governor Somkiet, “We built everything on our property as shown on the land title deed. So I didn’t think that we had encroached onto public land. We didn’t ask permission from the Cherng Talay Municipality to add to the construction since we figured that we were building on our own land.

“Unfortunately, the marker for the border between the public land and our land was washed away when the tsunami hit Phuket. So now the position of the property boundary is unclear and I’m not sure whether we encroached on the public beach or not,” he added.

“Regarding the complaints made by beach masseuses and food vendors, I will allow everyone to come back as soon as we sort everything out. On behalf of The Surin Phuket, I promise that I will provide the best spot for everyone to operate their business again,” Mr Vachira said.

Vice Governor Somkiet told the Phuket Gazette, “Since the hotel holds the land title deed and the marker of the border line is unclear, I suggest that the hotel should discuss the issue with the Department of Land. This case needs to be investigated before making any conclusions.

“The hotel may or may not have encroached public land. It’s difficult to be sure because the boundary is unclear. If it turns out that the hotel has encroached onto public land, then that part of the construction will have to be demolished,” he added.

“At the moment, I suggest that the hotel pay for the Department of Land to carry out a survey. After which we can then discuss the issue of encroachment and ownership of the private property,” he added.

The Surin Phuket is scheduled to reopen towards the end of the year. However, the matter of land ownership will have to be decided before they can open their doors to tourists again.