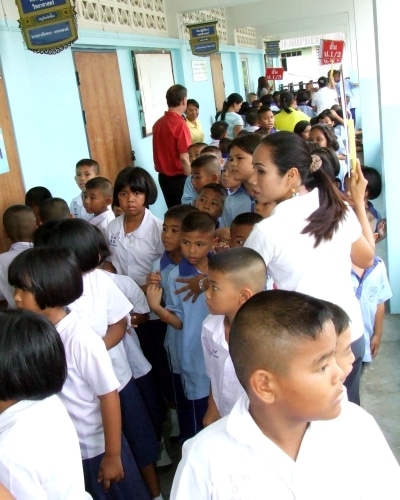 PHUKET: Some 350 primary school students in Patong ran for higher ground today in a tsunami drill organized by the Phuket office of the Department of Disaster Prevention and Mitigation (DDPM-Phuket).

At 1pm yesterday, the students at Baan Sainamyen School in Patong were split into two groups and educated about tsunamis by DDPM-Phuket officer Thanakuan Pinthong.

After the information session, the students went back to their normal routines when, at 3:30pm, a tsunami alert sounded. The students put to use the information they had received earlier in the day and ran to the second and third floors, with their teachers leading the way.

The teachers then conducted head counts, identified students who were “injured”, and searched for “missing” students.

The Baan Sainamyen school was one of two primary schools in Patong inundated by the 2004 tsunami. The Baan Kalim School, which sits lets than 50 meters from the high tide mark, suffered much more extensive damage. Remarkably, there were no deaths from the tsunami at either of these schools.

Most of the victims were people on the beach at the time, many of whom went out to investigate why the tide had receded in the moments before the disaster struck.

Yesterday’s Baan Sainamyen School drill comes ahead of a much larger version to be conducted by the National Disaster Warning Center on Monday, September 13.

The full-scale tsunami evacuation drill will take place with all 127 tsunami warning towers in the six Andaman provinces sounding simultaneously from 9:30am to 10:30am.