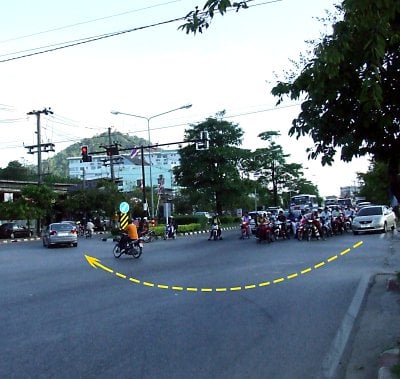 PHUKET: Hopes are being pinned on a novel approach to traffic control to solve the problem of how cross-country buses will head north after departing Phuket’s new provincial bus terminal on Thepkrasattri Rd southbound in Rassada.

How buses will head north is one of two crucial issues facing the new terminal, which has been sitting idle since its completion in December last year.

The Phuket Land Transport Office, which built the 128-million-baht station, said last month it was prepared to run the station on its own from October 1 until Rassada Municipality is up to the task.

But that announcement sparked a protest by local residents after they learned that the opening would entail scores of large intercity buses having to make U-turns on the already-congested stretch of Thepkrasattri Rd. They also complained about the lack of a public hearing before the station was built.

At a meeting held at Phuket Provincial Hall on August 26, a unique solution was proposed: the existing set of traffic lights at the Tantalum Junction would be modified to stop all traffic on the two inside lanes. This, in theory, would allow buses to approach the intersection from the road shoulder (‘breakdown lane’), giving them enough turning radius to make the U-turn while all other vehicular traffic waited for them.

After about two hours of discussion, and with no better options available, most of those present decided to try this approach for three months.

It could be some time before the public sees how well the system works. However, there is still no budget for the new traffic lights needed and no fixed date for the opening of the new terminal.

Arun Sanae, director of Phuket Provincial Highways Office, said the breakdown lane of Thepkrasattri Rd southbound, which is now parked in, would have to be clearly designated as a bus lane. Cars would still make their U-turns from the normal (passing) lane, as before.

Phuket Provincial Police Deputy Commander Chalit Kaewyarat said traffic police would be assigned to the junction around the clock to ensure smooth traffic flow and compliance with the law.

For a recent Phuket Gazette editorial on this topic, click here.