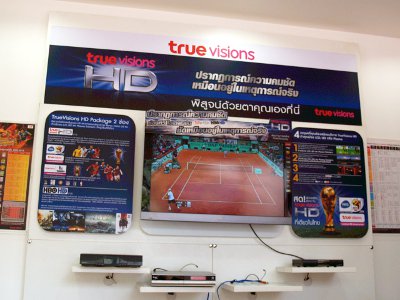 PHUKET: TrueVisions, Thailand’s leading subscription-based cable television operator, has announced an expansion of high definition (HD) services in a bid to broaden its subscriber base.

The service has now been expanded to 11 channels, offering a wide range of information, knowledge, music and entertainment programs.

Chief Commercial Officer Ongard Prapakmol said the company expected the HD service to be available in 19 provinces by the end of the year.

Though the new service remains limited to subscribers to the fiber-optic cable network, it will also be available to satellite customers next year, with the goal of covering more than two million households within the next two years, he said.

The service expansion would help the company achieve its revenue target of 10 billion baht this year, which would represent a 20 per cent annual increase, he said.

In the first quarter, the company generated 700 million baht in revenue from spot advertising, he added.