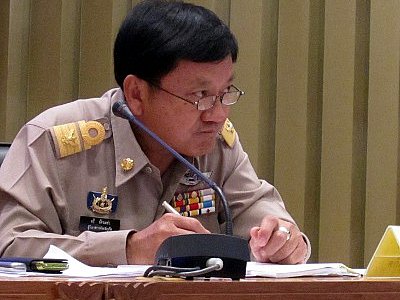 The road was damaged by a landslide on October 13 after heavy rain fell across Phuket. The road suffered further damage after yet another landslide at the same location on October 19.

At a meeting at Provincial Hall this morning, Mr Chairat explained to the governor that the road greatly affected the safety of motorists heading to and from Patong, but that Patong Municipality was powerless to fix it as the road falls under the responsibility of the Phuket Highways Office.

“The road is already busy with traffic in the morning and in the afternoon, and traffic will only get worse as we enter the high season,” he said.

However, Phuket Highways Office Deputy General Manager Sathaporn Sornchana told the governor, “The damage is too great for us to fix it immediately. All we can do right now is draw up a plan and submit it to our head office for the budget.”

“Regarding safety, the best we can do right now is close that lane,” he added.

Mr Sathaporn, however, did not explain how much the repairs would cost or precisely what would be required to fix the road, considering that the damaged section borders a very steep slope.

At the meeting, Mr Chairat also called for the Phuket office of the Land Transport Department to ramp up safety inspections on commercial passenger vehicles, especially buses.

The call for the boost in road safety follows the bus crash at the final curve entering Patong on the same road on Wednesday in which 22 people were injured, most of them Russian tourists who had arrived in Phuket only hours earlier.

“The tour bus that crashed on Wednesday looked nice on the outside, but is was probably not that safe,” said Mr Chairat.

The driver of the bus, Nakrob Tiewtrakul, told police after the accident that the brakes had failed.

Mr Nakrob has been a bus driver for more than 20 years.

“The driver of the bus was not paying enough attention when descending the hill into Patong,” he said.

Thief makes off with 950k baht in Phuket gold heist