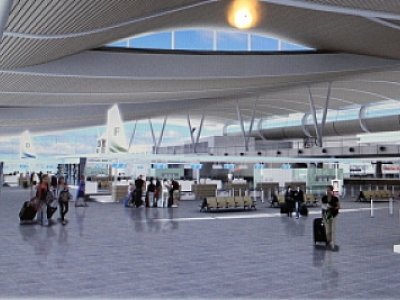 PHUKET: The tricky subject of ground transportation overshadowed other matters at a meeting intended to address concerns over Phuket International Airport’s expansion project.

The meeting, which was held at Kata Beach Resort last Thursday, was well attended by both public and private sector representatives from Phang Nga, Krabi and Phuket.

Flying Officer (Flg Off) Chaturongkapon started by stating that the international terminal is expected to be finished in 2014 and the domestic terminal by the beginning of 2015.

The estimated costs for the expansion, expected to handle 12.5 million passengers a year, is 5.791 billion baht.

A request for AOT to add more immigration counters was made by Chairwoman Tunyaratt.

“During the construction we have to think how to not cause unnecessary delays for the tourists,” she added.

Flg Off Chaturongkapon replied, “We are planning to set up more immigration counters, taking the total from 42 to 60.”

He suggested that Phuket Airport use the model employed at Suvarnabhumi Airport, where taxis queue up, the drivers paying a 50 baht fee.

Honorary Consul of the Czech Republic Anurak Tansiriroj also had an observation concerning the airport transportation.

“I have heard that taxis are expensive because the drivers have to pay a high commission to pick up passengers. Also, the taxi drivers are very competitive in trying to get passengers and have grabbed tourists. This is a problem that needs to be fixed, because internationally it doesn’t look good,” he said.

“The parking lot allocation needs to be solved. Right now limousines, taxi vans and taxi cars take up most of the parking spaces,” she said.

Patong Mayor Pian’s request for more runways was noted by Flg Off Chaturongkapon, but he explained that the airplanes are only using 2,000 meters of the 3,000 meter runway for take-offs and landings. He also pointed out that building more runways would have an adverse effect on the environment.

There were also requests to establish plans for rubbish management as well as management of shops inside the airport.

“All issues brought up in the meeting will be considered to improve the plan,” Flg Off Chaturongkapon told participants.

Swedish tourist drowns across the bay from Phuket

Phuket Live Wire: Why are we being throttled?