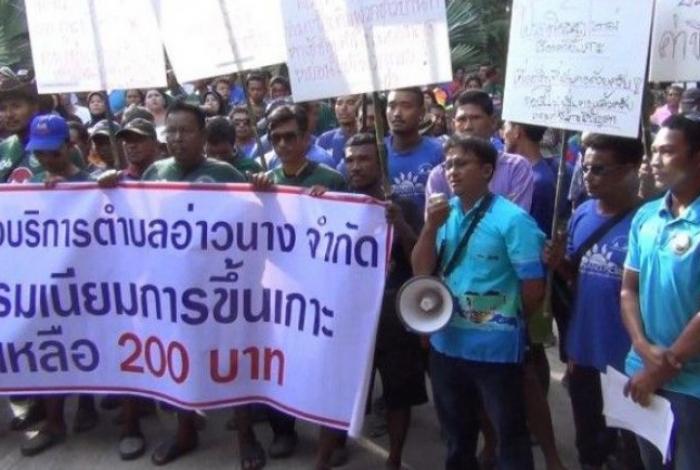 The blockade left about 1,000 angry tourists, who had bought island-hopping package tours, stranded at the pier.

More operators rallied in front of the park office at about 9am, saying they wanted the ugly race-based park entrance fees to be cut from 400 baht to 200 baht for foreign adults, and from 200 baht to 100 baht for children.

Entry for Thais is 40 baht per adult and 20 baht per child, Boonname Chauyradom, assistant park chief, confirmed to the Phuket Gazette.

The protesters claimed that the high fees for foreigners were adversely affecting their business and that the number of foreign visitors had dropped significantly.

When Natthapol Rattanapan, the National Parks Department’s Marine Park Manager told protesters that it was not possible to reduce the fees, they said they would continue their rally until their appeal was heard. Later, officials invited the group’s representatives to discuss the issue and come up with a solution.

At about 12.30pm, it was concluded that the protesters’ demand would be forwarded to the National Parks Department’s headquarters for consideration. The protesters accepted that it would take 20 days to reach a resolution and left.

However, Mr Natthapol later told Gazette reporters that it was in fact not possible to reduce park entry fees for foreigners, since these were set by a ministerial regulation. He added that the number of foreign visitors was actually on the rise.

He added that boat operators’ businesses may have been affected because there was more competition, as an astounding 248 new boats have been registered so far this year, adding to the 1,531 on record at the end of last year.