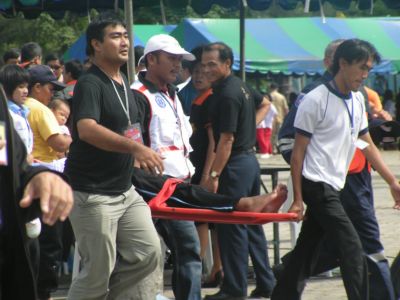 PATONG: Tourists in Patong opted to soak up the sun rather than run for their lives during yesterday’s tsunami drill. The exercise, held across the six Andaman provinces, included the sounding of all 79 tsunami warning towers operated by the National Disaster Warning Center (NDWC).

At Patong Beach, a female English tourist told the Gazette, “I heard the siren and knew what it was, but when I looked out and could see that there was no tsunami coming, I just sat here.”

When questioned what she would have done had a real wave been hurtling towards the beach, the English tourist gave no reply.

One male Kuwaiti tourist said, “The hotel told me about the drill and gave me brochures, so I knew there was no real danger. I am staying on the ninth floor of my hotel so I feel very safe on holiday in Patong.”

One male tourist said, “I knew there was a drill, but I couldn’t hear the siren.”

The drill, which was co-ordinated from a command center in Saphan Hin, in Phuket City, began at 9:30 am and finished at 11:30 am, with all 19 of Phuket’s warning towers tested.

At Saphan Hin, local residents from Rassada and Wichit joined students from Phuket Vocational College, Phuket Technical College and Phuket Polytechnic College in the drill, along with emergency-response personnel.

Meanwhile, tambon administration organizations (OrBorTor) and local municipalities conducted their own drills around the island.

Phuket Vice-Governor Smith Palawatvichai said that he was satisfied with Phuket’s part in the Andaman-wide tsunami drill.