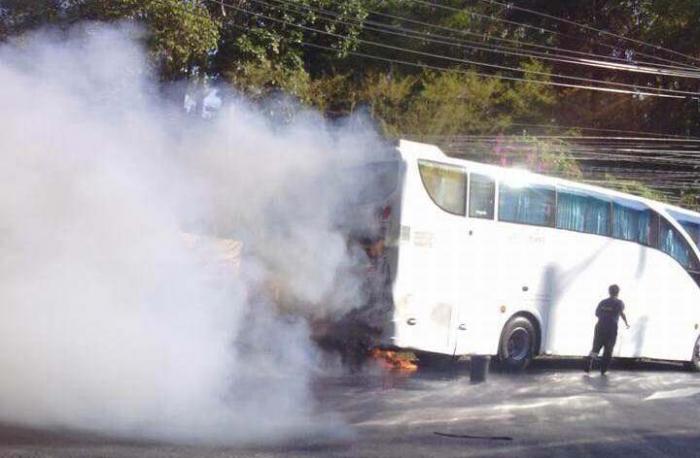 “The driver was en route from the airport to Patong via Karon at about 5:30pm. After spotting thick, black smoke emanating from the back of the bus, the driver stopped and evacuated the 24 tourists,” said Lt Col Sathid Noorit of the Chalong Police. “While fire-fighters battled the fire, the tourists were taken to their hotel in Patong on another bus.”

The fire, which is believed to have started due to a short circuit in the engine, took fire-fighters about 20 minutes to put out.

The Natrawee Sae Tiew tour bus company had recently had a faulty starter replaced and the bus had just been put back into service, explained the driver, Komsan Maksap.

“We have to confirm the exact cause of the fire and have yet to press charges,” Col Sathid said.

The bus was taken to the garage for further investigation, confirmed Col Sathid.

A total of 14 Chinese tourists escaped another bus fire in Phuket last month, which was also believed to have been caused by a short circuit, and which also occurred while the bus was enroute to Patong (story here).