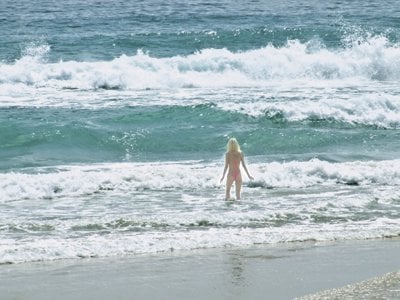 PHUKET: The death of Romanian tourist Gheorghe Paulive, who died after being pulled from dangerous surf at Karon on Tuesday, has prompted angry Phuket lifeguards to call for more cooperation from hotels in helping to warn guests about dangerous surf conditions.

Mr Paulive, 35, was pulled from the surf near the Karon Princess Hotel at around 11am on Tuesday.

He was pronounced dead by doctors at Bangkok Hospital Phuket at 5am yesterday, after succumbing from lack of oxygen to the brain.

“The lifeguards on duty were already busy rescuing four other people who were in trouble about 800 meters from him. Someone shouted for us to help the Romanian guy, but it took 10 minutes for us to rescue him because he was caught in the current,” explained Karon head lifeguard Utan Singsom.

Mr Paulive was administered oxygen from the nearest lifeguard station, about a kilometer away, before being rushed to Patong Hospital.

He was transferred to Bangkok Hospital Phuket on Wednesday.

“He should have been informed [of the dangerous surf] by the hotel where he was staying. He was swimming in a danger zone with red flags, where we do not allow people to swim,” said Mr Utan.

“Hotels should inform their guests about things such as the meaning of the different flags. Yellow flags mean ‘can swim, but exercise caution and stay within sight of the lifeguards’, and red flags mean ‘definitely no swimming’,” he said.

“We see guards at hotels helping guests cross the road, but they don’t warn them about swimming in the sea,” he said.

Mr Utan explained that only a few hotels in the area bothered to turn up to a July 9 meeting held to boost coordination between lifeguards and hotels in saving tourists from the sea.

“A few came, such as Club Med, Movenpick and The Boathouse, but the rest of them did not. They weren’t even interested, even though they are luxury hotels right of the beach,” he said.

“Another meeting will be held again, probably next month, depending on the Phuket Provincial Administrative Organization (PPAO),” he added.

In the past few weeks conditions have been treacherous and some 20 tourists nearly drowned at Kata Noi, Kata and Karon beaches alone during that period, Mr Utan said.

Originally from Phang Nga, the Australian-trained lifeguard has been patrolling Phuket beaches for 12 years.

Twelve lifeguards are responsible for patrolling four kilometer of beach starting at the north end of Karon Beach all the way to the southern end at Kata Noi.

Fellow Karon lifeguard Chartree Promnoon, 32, said that only about 10% of tourists heed warnings not to enter the surf when conditions are dangerous.