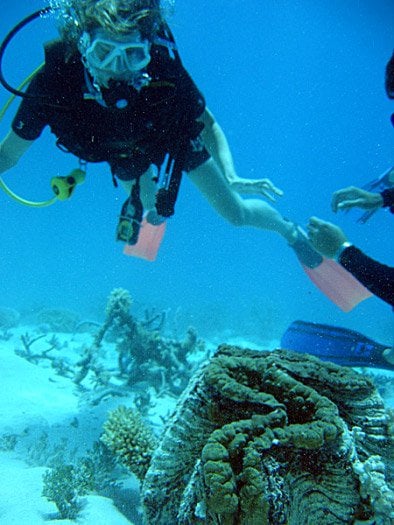 Like coral, they also suffer “bleaching” if water temperatures rise too high.

“With the return normal temperatures, the bleaching disappears,” he explained.

Experts generally agree bleaching is not a symptom of dying sea-life, but the situation must nonetheless be monitored closely, Mr Kongkiat said.

Of particular worry is the state of giant clam species once abundant along Thailand’s Andaman coastline. Out of the eight species of giant clam in the world, five species were found in Thai waters but two of these are already extinct, according to PMBC.

“Many have been dug up and sold off…Those that remain are found most often in Phang Nga’s Surin Islands and at Koh Adang in Satun,” he said.

The colorful shell of the giant clam is wanted by aquarium fish owners in what is a lucrative but illegal trade, causing the population to dramatically decrease. It’s raised fears of extinction for this marine animal in its natural habitat.

According to Thailand’s Enhancement and Conservation of National Environmental Quality Act, giant clam species are protected and no hunting, possession or trade is allowed.

Giant clams are also listed as an endangered species in the Convention on International Trade in Endangered Species of Wild Fauna and Flora, better know as CITES.

The Giant Clam Rehabilitation Project in the Andaman coastal areas is one channel to preserve and spawn more giant clams.

Yet, releasing this sea life into the wild is a problem and despite their size authorities have found it hard to stamp out giant clam smuggling.

To aid their battle, the PMBC has been cultivating the creatures and then releasing them in waters around Phuket.

“We’ve put them in many places and found that Koh Racha is where they show the best chance for survival,” he said.

“The clams must be cultivated until reaching a breadth of 15 – 20 centimeters: smaller than that and other sea creatures eat them.”

PMBC researchers are also studying the species with the ultimate goal of producing a strain able to withstand higher water temperatures without discoloring.

“We have been raising them in water warmer than normal as part of a long-term plan to promote their survival,” he said.

Colorful corals and other sea life are one of the island’s principal tourist attractions, but higher water temperatures resulting from factors ranging from pollution to the “El Nino” effect produces a morbidity inspiring alarm rather than admiration in visitors.

Fishing, mining, the run-off from construction and other development have further contributed to the destruction of Phuket’s once thriving coastal habitats.