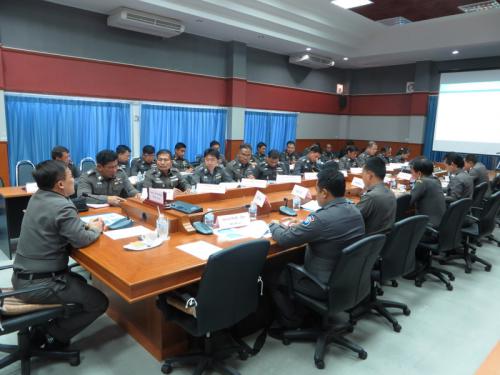 PHUKET: Tourist Police in Phuket, Phang Nga, Krabi and Surat Thani have received a public tongue-lashing over a lack of patrols in tourist areas.

“I never see Tourist Police out on patrol when I visit – they are only working in their small police boxes,” said Gen Wuthi Liptapallop, a top-flight Adviser to the Royal Thai Police Commissioner-General Adul Saengsingkaew.

“How are tourists supposed to feel safe if police are just in their booths?”

Speaking at a meeting of police commanders on Tuesday, Gen Wuthi demanded that Tourist Police increase the frequency of patrols in tourist areas.

“I would like to see officers patrolling at night until about 2am. If not, I will take action,” he warned.

The gravity of Gen Wuthi’s disappointment was lessened by general praise for the positive work of the Royal Thai Police since August 2012.

“Phuket has only 1,500 police officers to handle criminal activity throughout the island. It’s just not enough. This shortage is a problem in every province,” Gen Wuthi said. “Despite this, officers are doing a great job protecting tourists.”

With the country’s goal of generating more than 2 trillion baht from tourism this year, Gen Wuthi made it clear that more boots on the ground in tourist areas is a priority with introduction of the Asean Economic Community (AEC) just around the corner.

“I was assigned by Commissioner-General Adul to ensure tourist safety, which will support the government in achieving its tourism goals,” Gen Wuthi said.

Gen Wuthi also impressed upon the Royal Thai Police officers that being able to communicate clearly in English is becoming a fundamental requirement to working as an Immigration or Tourist Police officer.

“They will have to pass a language test. If they can’t pass it, they will be moved to a different position,” he said.

After the meeting at Phuket Provincial Police Station, Gen Wuthi met with Immigration and Tourist Police officers separately. The media were not allowed to attend.

Special Report: If there’s something strange and it don’t look good”¦ who ya gonna call?