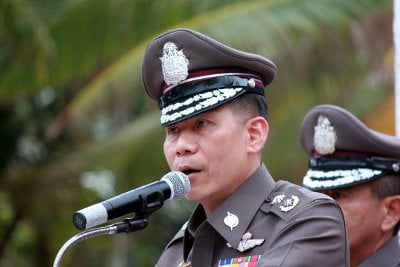 The Assistant Commissioner’s plea came at the launch of a publicity campaign in Patong on August 17 to promote the new Patong Safety Zone project to tourists.

“Crime is on the rise everywhere these days, especially in tourist areas, where foreigners are targeted. This directly affects the reputation of those areas among tourists,” Lt Gen Chalermkiat said.

He added that with the Asean Economic Community (AEC) coming into effect in 2015, the Thai government had set a national target of earning 2 trillion baht through tourism.

“Ensuring the safety of tourists and tackling the problem of crime is necessary and requires every part of society to cooperate. There is a limited number of police officers, so we need cooperation from the public to keep an eye out for crime, especially in communities such as Patong where there are many tourists,” he said.

Patong Police Superintendent Chiraphat Pochanaphan explained that Patong has about 150 police officers, not enough to effectively enforce the law throughout the whole town.

“We need 90 more officers. We have already requested these extra officers, but have been told to wait until next year,” he told the Gazette.

“There are simply not enough new recruits. Every police station has the same problem,” he said.

Col Chiraphat said that his officers were now working with volunteers to assist police in improving public safety.

“This includes people such as beach guards, security guards at nightlife entertainment venues and at hotels, as well as Civil Defense Volunteers,” he explained.

Such volunteers are being issued police radios so that they can report incidents directly and immediately to the police, he added.

Regarding the CCTV network being set up to cover the entire safety zone, Col Chiraphat explained, “Extra computer servers are being installed in the CCTV control room at Patong Police Station. I have checked many CCTV systems across Patong and they are working well. They are ready to be hooked up as soon as the servers in the control room are ready.”

Once the system is operational, police will invite local business owners and other people working or living in Patong to sign up for access so any member of the public can help monitor the thousands of CCTV cameras that will be providing real-time footage to the police CCTV control center.