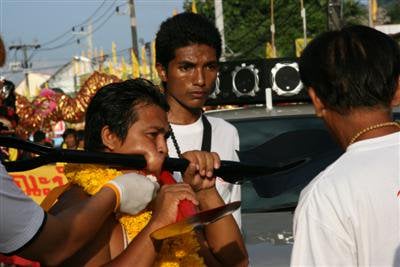 PHUKET CITY: The Vegetarian Festival is ostensibly a period of purity, but the Phuket Provincial Heath Office has nevertheless issued a statement warning people about the risks of HIV/Aids and hepatitis infection during the 10-day event.

Phuket Public Health Office chief Dr Paisan Worrasathit told the Gazette, “We are cautioning people who hurt themselves with puncture wounds from items such as spades, spears, knives, pins…. We fear some of them may contract diseases as a result,” he said.

Dr Paisan was speaking in reference to the scores of mah song (literally, “entranced horses”) spirit mediums who pierce such objects through their cheeks in acts of ritual self-mutilation, or do so with the assistance of “handlers” who escort them while they are entranced.

All involved should sterilize the instruments before piercing and then take steps to prevent viral and bacterial infection, both to the mah song and others who could come into contact with their blood, he said.

“Apart from the risks associated with sharp objects, we are also checking to ensure that proper hygiene is being maintained at food stalls by giving advice to vendors,” he said.

VIPs get familiar with Bangla