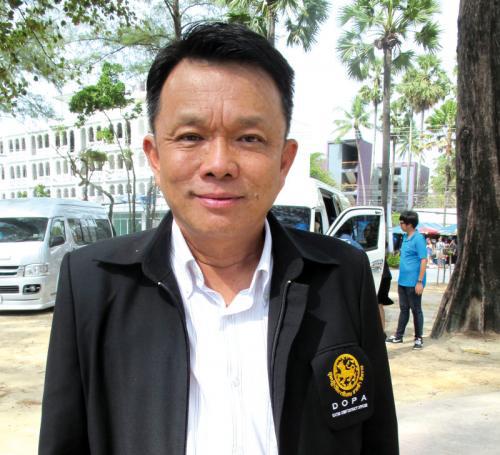 Mr Veera told the Phuket Gazette that he received the “urgent order” to leave the province within 10 days at 3pm today.

“I actually heard the news last night, but the official order came this afternoon,” he said.

“I have not been given a precise reason for my urgent transfer. The order was issued by Wiboon Sanguanpong, the Permanent Secretary for the Ministry of Interior,” Mr Veera told the Gazette.

The order comes out of step with the regular transfer of officials, which falls on October 1 each year.

Mr Veera arrived in Phuket on March 11 this year, after serving as District Chief of Palian in Trang Province.

“I have been assigned to take up the position of District Chief of Don Sak, in Surat Thani Province,” Mr Veera confirmed.

Don Sak is the well-known jump-off point for tourists heading to Koh Samui on the Gulf of Thailand (click here). The rural area has an estimated population of 35,468 – far from the crowds of Patong.

Mr Veera will be replaced by Sayan Chanasaiwong, currently District Chief of Sungai Padi in the strife-torn Deep South province of Narathiwat.

Mr Sayan will formally take up the position of Kathu District Chief on October 28.

“I would like the incoming District Chief to keep pushing for the beach clear zone in Patong [story here] and to target illegal logging in Phuket,” Mr Veera said.

Since arriving in Phuket, Mr Veera has built a reputation for targeting illegal logging, land encroachment and drugs in his district, which includes the hills of Kamala and the streets of Patong.

He also maintained an active online persona, reporting and photographing everything from police raids to emergency responses to accidents.

One of his most recent posts online was the announcement that Patong Mayor Pian Keesin had been suspended from office for vote fraud (story here).

SuperCheap Phuket rises from the ashes