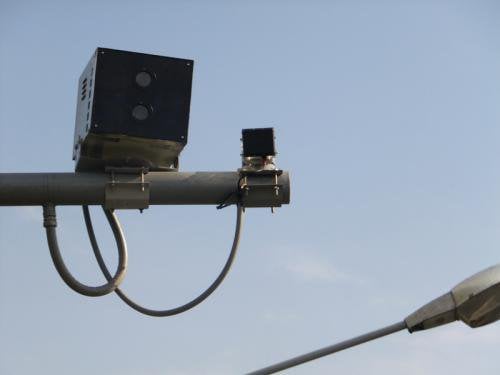 PHUKET: Drivers on Phuket moving at reckless speeds of over 200km/hr are outpacing the ability of the island’s new speed cameras to capture clear images of them.

“In Thalang, the cameras are set to photograph cars travelling in excess of 120km/hr. However, the images of the licenses plates on cars going extremely fast are too blurry to read,” Thalang Police Deputy Superintendent Sarayuth Meeboon told the Phuket Gazette yesterday.

“The company that installed the cameras is already taking steps to fix the problem.”

Despite the glitch, 15 to 20 tickets are issued daily to speeders on the straightaway in front of the Muang Thalang School.

The cameras, in four areas on the island (story here), are not all triggered by the same speed. Unlike the camera in Thalang, the one on the bypass road is set to capture cars travelling at speeds over 90km/hr, said Lt Col Rungrit Rattanapagdee of the Phuket City Traffic Police Police.

Tickets are mailed to the car owner’s address and expected to arrive in four to five days, leaving about ten days for the recipient to pay the fine before the license for the vehicle is suspended.

“If drivers don’t pay the fine and continue to drive the car with a suspended plate, they are subject to additional charges and fines,” said Maj Sarayuth.

“If they manage to avoid being caught and later try to renew their plates at the Land Transportation Office, they will not be able to do so.”

The money from the 500-baht fines is sent to the Royal Thai Police headquarters in Bangkok.